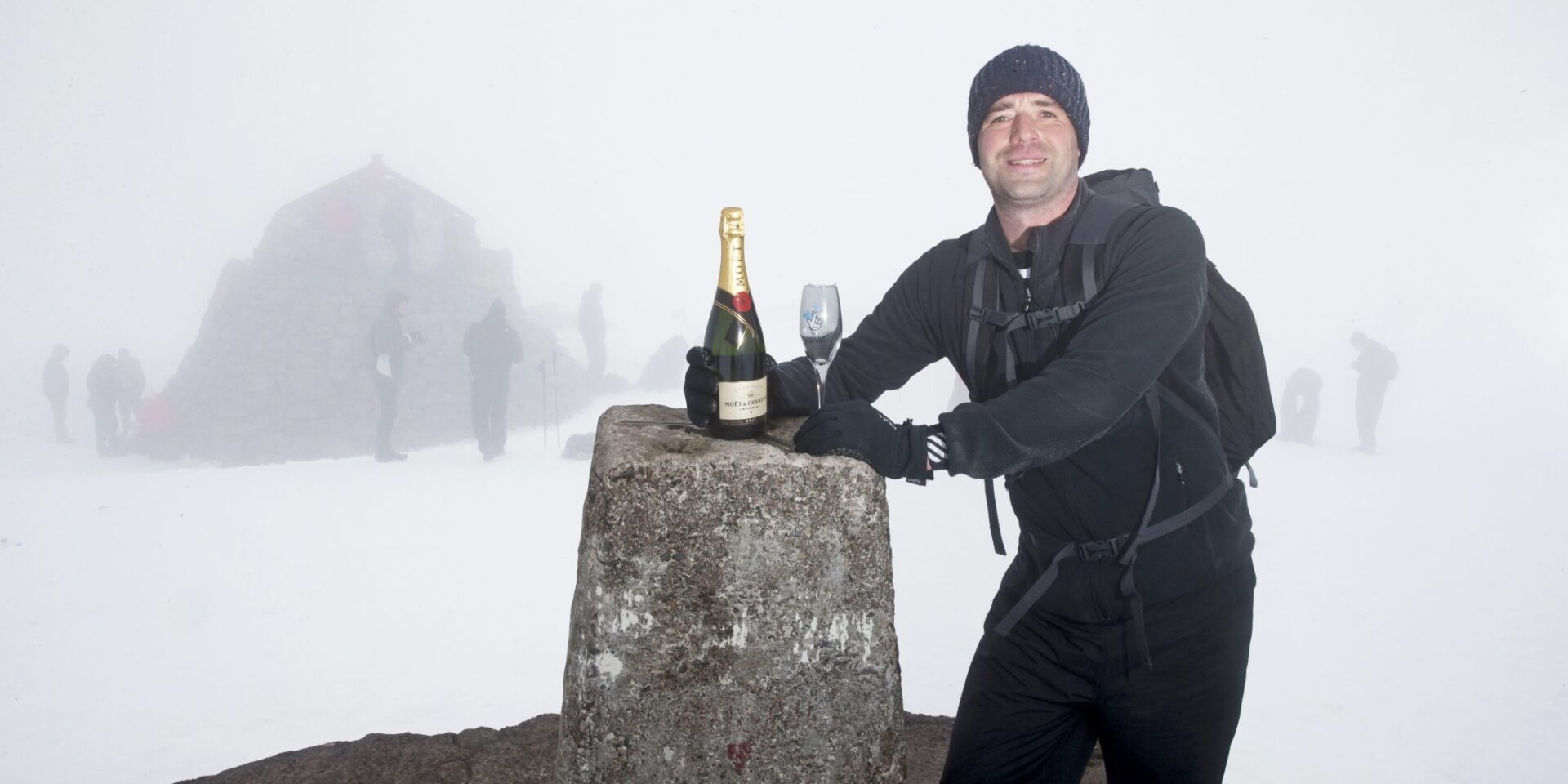 Edinburgh roofer John Edmond (35) from Port Seton, who won £1,000,000 in the EuroMillions draw on June 26 2015, ascended more than 4,400 feet and faced treacherous weather conditions to mark the milestone and tick off a lifelong dream from his bucket list.

Looking at their shopping trends across time, out have gone designer watches, ride on mowers, race horses and conservatories. In have come protecting woodland, paying university fees and bar/games rooms.

Commenting on his Ben Nevis journey as part of the 5,000th celebrations, John said: “I’ve always wanted to climb Ben Nevis so when the opportunity arose, I was up for the challenge. I’m not an avid hill walker or have much climbing experience, so I was a bit nervous as I knew I would have my work cut out for me – but also excited to be part of this once in a lifetime celebration.

“Scotland was looking glorious in the sunshine when we initially left ground level, however the conditions quickly changed as we reached the halfway mark – typical Scottish weather! Visibility was poor, I couldn’t see two or three feet in front of me, and the wind speeds were averaging 40mph. The heavy snow on the ground made it more challenging – but to me, it was all part of the adventure.

“With tough climbing, there were moments I was unsure if I was going to make it to the top, so I can’t put into words how I felt when I finally reached the summit. To know I was standing on the UK’s highest peak was an unbelievable achievement, made all the better with a chilled glass of champagne in my hand.

“I was honoured that The National Lottery asked me to participate in this opportunity out of all the millionaires in Scotland – it’s certainly one I will never forget.”

The Ben Nevis hike forms part of The National Lottery’s nationwide celebrations to mark making its 5,000th millionaire. Astonishingly, the leap from 4,000 to 5,000 millionaires has taken just 29 months - this is a rate of more than one new millionaire a day. In Scotland alone, 473 people have celebrated that magic moment of winning £1 Million or more.

Including these millionaires there have now been more than 38,800 big winners of £50,000 or more across all National Lottery games since 1994 with 3,220 of those in Scotland.

The National Lottery Millionaire report also reveals that gifting to friends, family and charity remains the top priority for winners. Almost half declare that it is the sharing of the win that has given them the most happiness.

This gifting means that the 5,000 millionaires have created an astonishing 1,750 further millionaires by sharing their windfall. And National Lottery wins are now also starting to support future generations. In all, 57% of winners will make their child or children a millionaire and 36% believe they will make their grandchildren millionaires in the future.

Andy Carter, Senior Winners’ Advisor at The National Lottery said, “After the shock and excitement nearly all winners’ first question is how they can look after their nearest and dearest. In many cases this seems to bring the winners even greater joy than thinking about how they can treat themselves.

“I see first-hand the effect a win can have on the circle of people close to a winner, and this always reminds me that at heart we are a nation that is kind and generous.”

Of course winners still indulge in some unusual and quirky treats once they have a life-changing bank balance. The report reveals winners have splashed out on a football pitch for their garden, a pub and pet lambs.