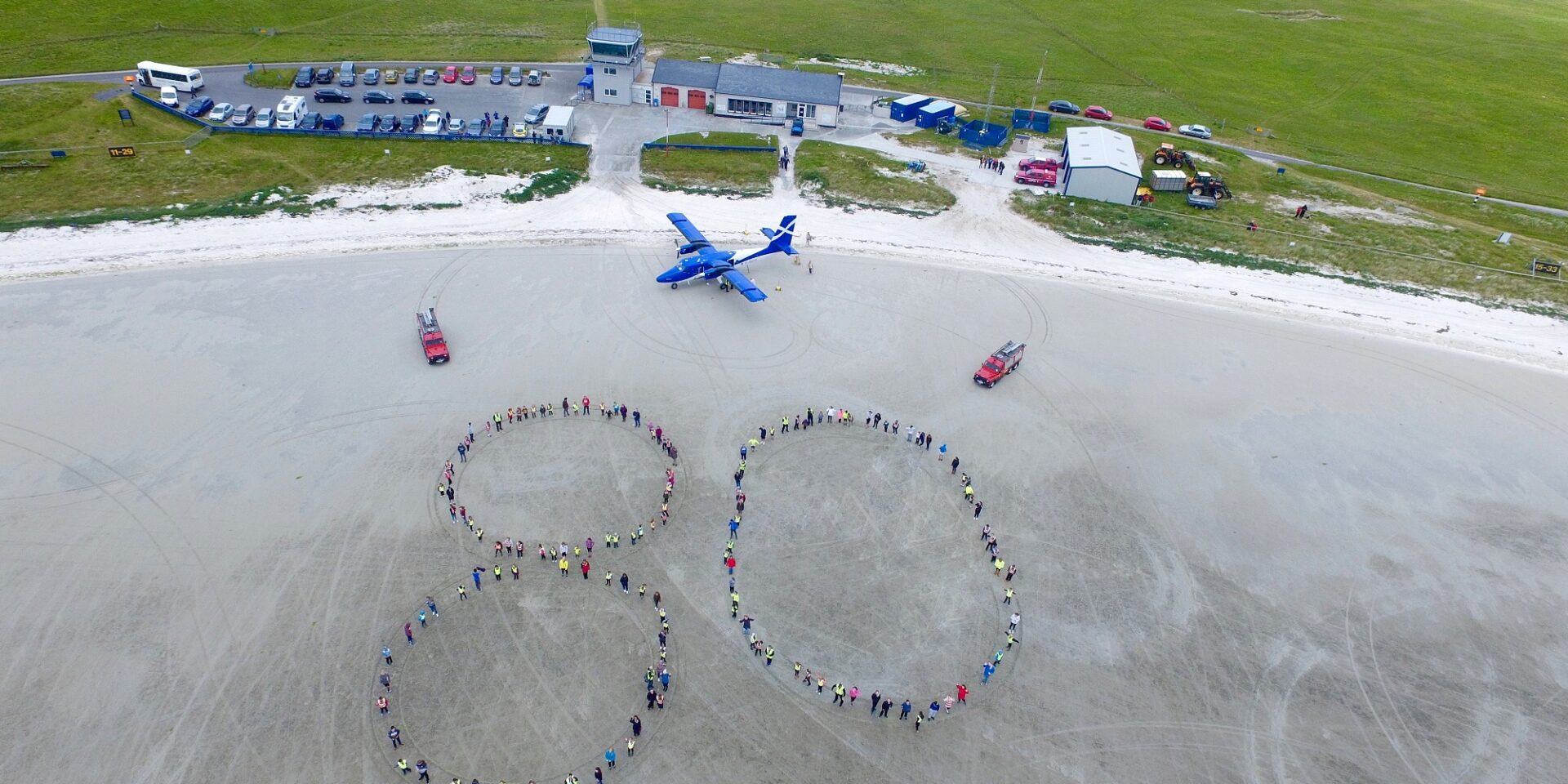 The small airport, managed by Highlands and Islands Airports Limited on the Isle of Barra in the Outer Hebrides, will celebrate eight decades of island community links to mainland Scotland with a time capsule burial beside the Traigh Mhor cockleshell beach runway on Monday August 8.

The event will be attended by Scottish Government Minister for Transport and the Islands, Humza Yousaf MSP, as well as local dignitaries and managing director of Loganair Jonathan Hinkles.

Barra Airport’s 80th Birthday party celebrations launch with goody bags for all passengers travelling on the day. An airport picnic for Barra Airport employees and their families will then continue the festivities.

Humza Yousaf MSP will bury a time capsule containing whisky, an engraved Quaich, messages from management and a selection of the best illustrations visualising Barra Airport’s future appearance, all to be opened in 2096. A special community showing of Whisky Galore’s 2016 remake, starring Eddie Izzard and Gregor Fisher, will round off the day’s celebrations and commemorate the airport’s longstanding role in providing vital links for the island community.

The inclusion of whisky in the buried time capsule invokes the infamous tale of the SS Politician; a cargo ship which ran aground off the nearby Isle of Eriskay in 1941 while carrying 28,000 cases of malt whisky. The story goes that locals rescued countless bottles and crates from the stricken ship and buried them across the island to evade customs officers – a tale that would later inform the plot of both the original and contemporary releases of Whisky Galore.

“The airport delivers a vital service to over 10,000 passengers a year and opens up opportunities to connect island businesses with the mainland, supporting the local economy.

“The iconic Barra beach landing attracts a great deal of attention from film makers around the world and the local team here are always so accommodating, helping to promote the island as a bucket list destination while at the same time, operating and managing an airport with growing passenger numbers.”

Minister for Transport and the Islands Humza Yousaf added: “I’m absolutely delighted to be part of Barra Airport’s 80th birthday celebrations, helping highlight the important role this iconic airport plays for the island.

“The unique and spectacular beach runway is admired around the world and is part of the fantastic tourism experience on offer in the Western Isles.

“It’s also important to celebrate the crucial role the airport plays for Barra residents, enabling regular and reliable access to the mainland.

“I congratulate Barra Airport on reaching this milestone and wish everyone involved every success for the next 80 years.”

“As we reach the incredible milestone of 80 years of Barra's Airport, we must recognise and pay thanks to everyone involved in making this unique operation happen every day, both now and in the past.

“We're proud to include the times subject to tide cachet in our schedules and look forward to doing so for many years to come."

Over 100 children from Barra’s Eoligarry and Castlebay schools as well as visitors to the airport have been asked to draw their interpretation of Barra Airport 80 years from now, for the chance to win two free return tickets between Barra and Glasgow. The winner will be announced by a member of the Highlands and Islands Airports Ltd team on August 31.

Barra Airport is served by Loganair, who fly the Government-owned Havilland Canada DHC-6 Twin Otter propeller planes, regularly making the 75-minute journey to and from the picturesque beach. There are normally two return flights between Glasgow and Barra per day, with each timed to coincide with low tide.

Barra Airport was voted the world’s most stunning landing spot, following a global poll of passengers and pilots.