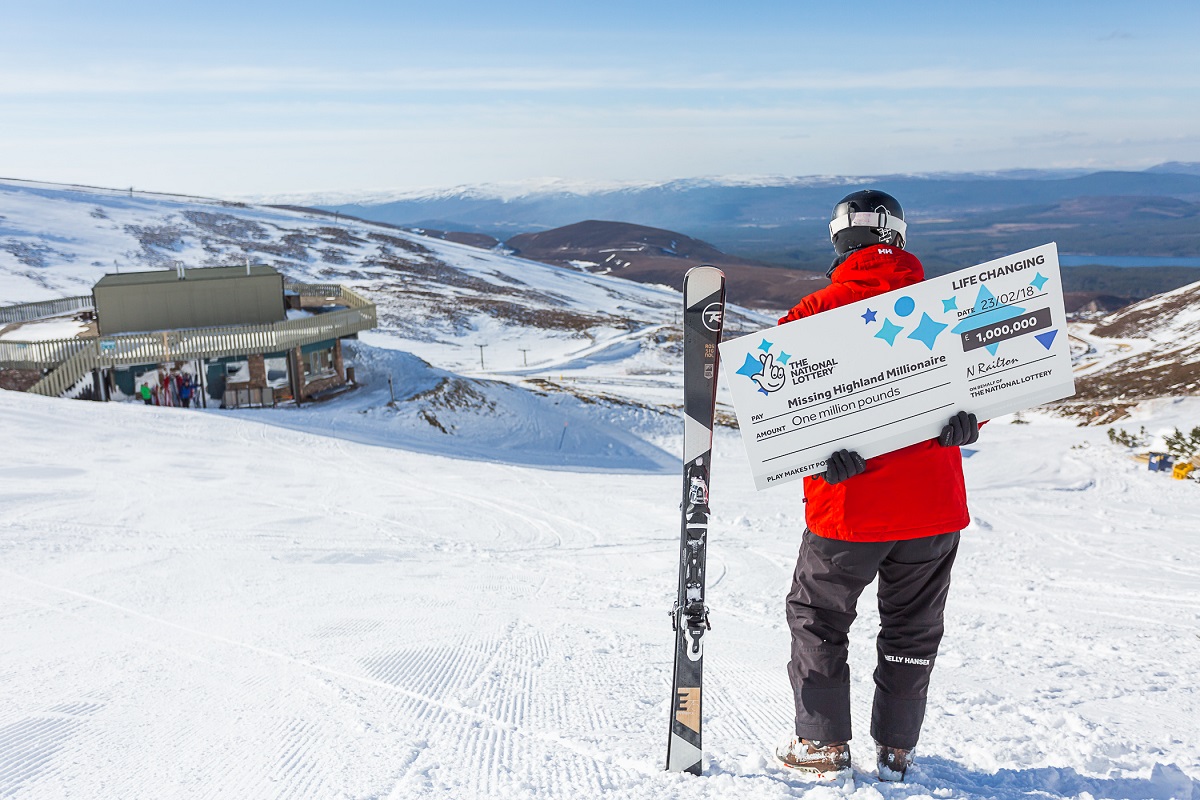 With just days to go before the missing winner’s chance to claim is up if they happen to have gone ‘off piste’ and lost or damaged their ticket, players in the Highland Council Area are being urged to search out their EuroMillions tickets and then check their unique Millionaire Maker code.

The winning Millionaire Maker code on 23 February for this prize was JLVR 34110, and anyone not in possession of their ticket but who still believe they may have won must make a claim in writing to Camelot by 25 March 2018 for the chance to become an instant millionaire1.

To help jog the missing ticket-holder’s memory, members of the CairnGorm Mountain Ski Patrol put on their fastest skies as they tackled the snowy Scottish terrain in a ‘search and rescue’ mission to unite the missing millionaire with their winnings. Giant slalom gates displayed the winning Millionaire Maker code, which can be found at the bottom of the missing winner’s EuroMillions ticket.

Nancy Mathews, member of the CairnGorm Mountain Ski Patrol, who joined the millionaire search, said: “We were thrilled to support the hunt and help in the search for the mystery ticket-holder so they can be united with their winnings – it’s a life changing prize!

“If you haven’t got your ticket for whatever reason – maybe you’ve misplaced it for the time being or can’t remember where you last saw it – don’t worry, you have until Sunday (25 March) to register a claim in writing with Camelot.

“Of course, it may be that the ticket-holder just hasn’t got round to checking their ticket yet so my advice to all EuroMillions players in the Highland Council Area – from John o’Groats to Glencoe – would be to search anywhere a missing EuroMillions ticket could be hiding and, once they have it safely in their hands, check it. Hopefully the winner loves the mountains and pays us a visit as a newly found National Lottery millionaire!”

For every EuroMillions line played UK players automatically received a Millionaire Maker code, entered into both the European and UK Millionaire Maker draws, printed on their ticket. Every unclaimed prize has 180 days to be claimed so the lucky ticket-holder has until 22 August 2018 to claim their prize with their ticket2.

1Under its licence Camelot has the discretion to pay prizes in respect of stolen, lost or destroyed National Lottery tickets only if the player has submitted a claim in writing within 30 days of the relevant draw. If the player can provide sufficient evidence, Camelot will investigate and consider the validity of the claim. Camelot will then determine at its discretion whether the claim is valid and is able to pay the prize 180 days after the draw.

2Players can contact Camelot by telephoning the National Lottery Line during its normal operating hours. Alternatively, players can email Camelot to confirm they intend to claim their prize but this email must be received at help@national-lottery.co.uk no later than the end (before 12 midnight) of the 180 day claim period, and the claim must subsequently be made in person. Please see Game Rules and Procedures for full details of how to claim.