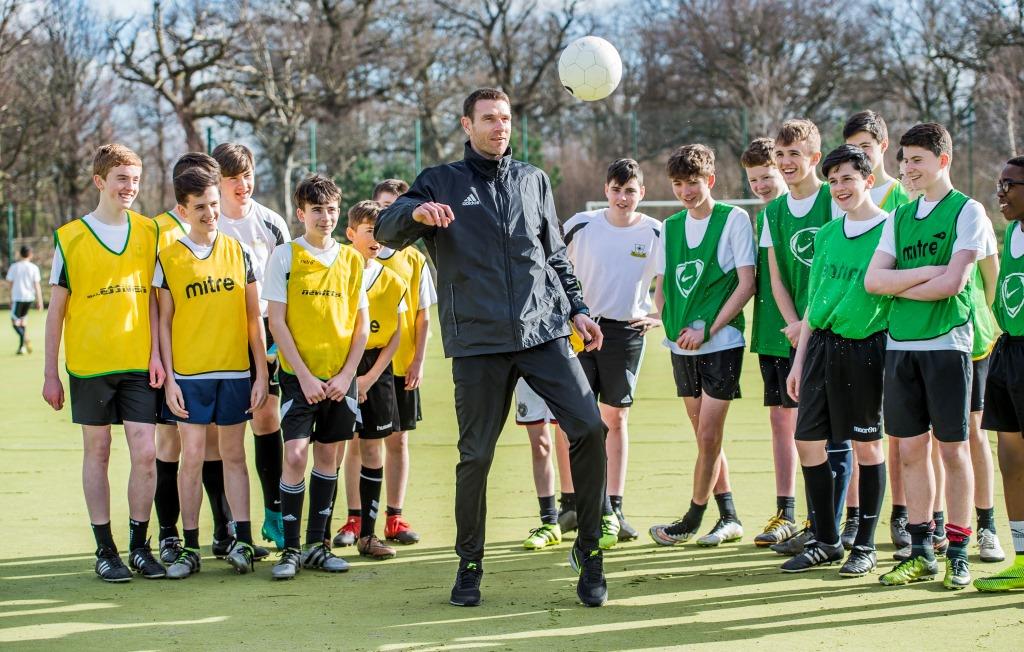 Around 50 boys and girls attended the training session hosted by the high-profile personalities, who taught the children some hints and tips as well as sharing tales from their sporting experiences across the years in the hope of encouraging the younger generation take up the sport.

Stephen McManus, who is a former pupil of Holy Cross High School, said: “It’s amazing to be back at Holy Cross, I have great memories of my school days here and it’s a pleasure to have this chance to give something back. Sport plays a major role in school life here which is part of the reason it has such a positive culture.”

The pupils were also given an insight into the important role of sport in the media as the leading BBC Scotland radio programme, Sportsound, broadcasted their evening programme live from the school. Presenter Kenny Macintyre was joined by a panel of experts on Scottish football including Barry Ferguson, Motherwell striker and former Celtic player, Scott McDonald, Hamilton Accies Chairman, Les Gray, and BBC football pundit, Chick Young, allowing the pupils to understand more about the way sport is covered by the national broadcaster.

Presenter Kenny Macintyre hosted the session, giving pupils, parents and staff the opportunity to participate in a Q&A session with the sporting personalities live on air, asking about their career highlights as well as discussing Scotland’s sporting landscape.

Scott McDonald said: “I’m delighted to be involved in this outside broadcast at Holy Cross. Taking questions from the audience, live on air, certainly keeps us on our toes. It’s great to see there’s still so much passion for football in Scotland - maybe some of our answers helped to encourage some of the big Scottish football talent of tomorrow?”

Holy Cross High School also holds the sportscotland Gold School Sport Award, a prestigious national award that recognises innovation and achievement in delivering physical education and extra-curricular sport. Headteacher John Reilly said: “Hosting the BBC Scotland Sportsound outside broadcast is a wonderful opportunity for our whole school community, it gives us a chance to bring people together through sport in an innovative way. The school is buzzing with excitement and we’re delighted to be working with sportscotland to make this happen, it is an excellent example of partnership working to improve the learning experience for pupils.”

sportscotland is building a world-class sporting system and is working in partnership with BBC Scotland to raise the profile of sport across the country. As part of this initiative, the BBC will be taking Sportsound on the road with the help of sportscotland to give young people a memorable experience whilst engaging in sport.

Stewart Harris, Chief Executive of sportscotland, said: “At sportscotland, putting young people at the centre of our efforts is a crucial part of what we do. Working in partnership with colleagues at the BBC, we hope to raise the awareness of sport and the openings that are available. It’s a fantastic that the pupils at Holy Cross High School had the chance to train with professional Scottish football coaches.

“Through our Active School, School Sport Awards and Young Ambassador programmes, we hope to create closer links between physical education, school sport and club sport which benefits young people by providing more and better opportunities to take part in sport.”