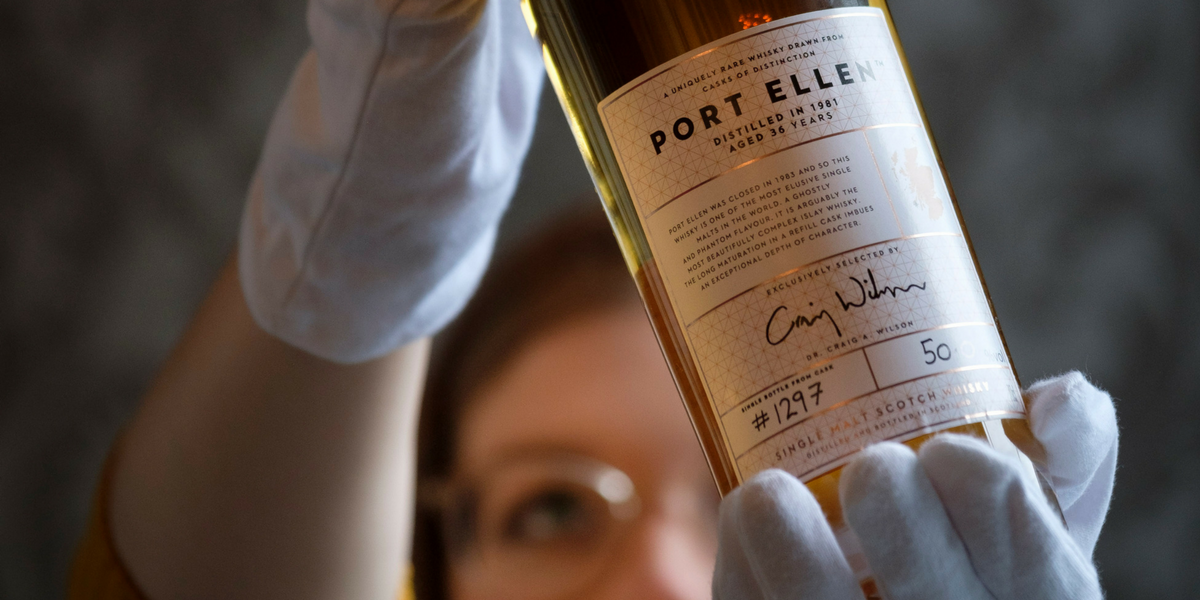 One of the world’s most sought-after and rarest Single Malt Scotch Whiskies has been sold at auction for an impressive £9,375 – nearly double the price estimate.

The 1981 Port Ellen went under the hammer at Bonhams’ Whisky Sale in Edinburgh, Scotland today (4 October 2017) and was purchased by an unnamed buyer.

As the first bottle drawn from a privately-owned cask, the 36-year-old single malt offers its new owner a taste of true rarity.

James Mackay, Head of Rare & Collectable Spirits at Diageo, commented: “Port Ellen stocks are rapidly diminishing, putting the liquid in a different category from most other aged Single Malts on the market. Moreover, this now legendary single malt is not merely rare, old and in great demand; it is of outstanding quality.

“Over the last few years we’ve seen a rapid growth of interest in rare and collectable whiskies, and our Casks of Distinction programme gives private clients the chance to purchase unique, rare whiskies from Diageo’s extensive collection.

The 36-year-old Port Ellen expression is a rare survivor from a golden age. Port Ellen was established as a malt mill on Islay’s south coast in 1825 and soon after developed into a major distillery. When the distillery closed in 1983 it had been in production for just 16 years after 35 years of closure, so there was as yet no knowledge of how well Port Ellen would age - it turned out to be some of the finest character found on the island of Islay.

It is now one of Islay's most distinctive single malts and has attained great status among drinkers, collectors and investors alike. With a deep smoky taste, derived from the peat used to dry its barley, its finish is described as “medium to long, charred and smoky-sweet, the char slowly fading into sweet-spicy oak, with a last note of white pepper to re-heat the palate”.

Since December 2012, prices of Port Ellen have increased by +128% - soaring from as little as £100 two decades ago to today’s £2,500 per bottle, with scarcity being the main driver of the consistently escalating prices*.

The 1981 Port Ellen bottle was auctioned independently by a private owner. The single cask, which the bottle was drawn from, was purchased by the owner as part of Diageo’s ‘Casks of Distinction’. As part of this programme, Diageo gives selected private clients the chance to purchase single casks that have extraordinary quality and character. As each cask is entirely unique, patrons become the sole owners of some of the rarest whiskies ever to be released from Diageo’s extensive collection.