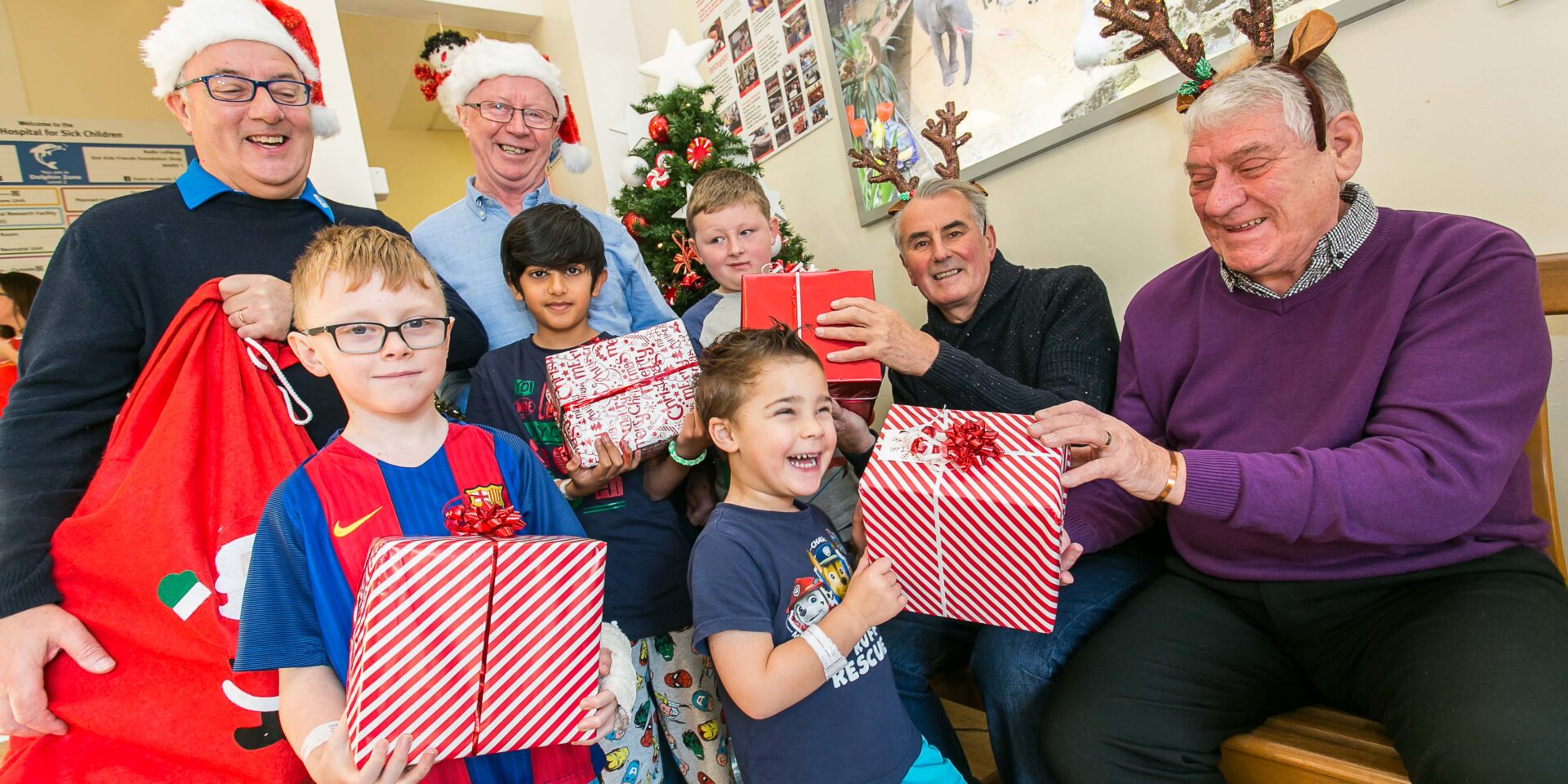 The syndicate of Hibs supporters, who scooped an incredible £1M on Lotto  in August,  took on the role of Santa for the day and delivered a sack load of special presents to the children and their families who are likely to be spending the festive period in the hospital.

The gifts to The Sick Kids Friends Foundation included DVD players and a stash of films to help keep patients and their brothers and sisters entertained during what can be many long days in hospital.

The syndicate, named the ‘ScottieHibbies’ after their old local The Scottie Pub and their love of Hibernian F.C is made up of six retired friends – Douglas Gibson (72), William Mackie (65), Jim Robertson (66), David Hannan (65), David Hastie (71) and Stewart McLaren (73). They won one of 67 life changing additional big prizes in the Lotto Rio medal Draw which celebrated each of the medals won by Team GB during the Olympics.

Syndicate leader, Douglas said: “The work that the Royal Hospital for Sick Children does, supported by the Sick Kids Friends Foundation, is truly amazing. We’ve been blessed with a real change in our luck this year and we all decided we wanted to do something to support these guys as they fight their conditions.

“After spending time in the hospital today it really hit home how much we need to support charities like this and how much of a difference even the smallest gesture can make.

“We hope the kids enjoy using the DVD players and movies and that they can make a small difference to the time they spend in the hospital.”

Sue Diamond from The Sick Kids Friends Foundation added: “The portable DVD players are brilliant gifts to give as it means children can do something together with parents and siblings to pass the time between appointments, surgery and treatments.

“Not only are gifts like these a home comfort and fun, but they are also used to distract children who may be having a procedure or about to go for an operation.  The fact that they are portable is great as it means that they can be used across the hospital in waiting rooms, treatment rooms and when children cannot leave their beds.

“We are all really grateful to the ScottieHibbies for this thoughtful donation which will really make a difference to the children’s hospital experience.  They have truly helped to make Christmas magical.”

The big hearted ScottieHibbies have put their win to good use since August. Not only have they ensured their families are looked after, they have also have contributed to several other charities they are passionate about. The lucky syndicate have also splashed out on a few treats for their loved ones, ensuring they will all have a Christmas to remember.

The Royal Hospital for Sick Children has previously benefited from National Lottery funding to launch their Drop-In Centre which celebrated its 10th anniversary this year and was the first of its kind in Britain.

Further information about The Sick Kids Friends Foundation can be found at www.edinburghsickkids.org