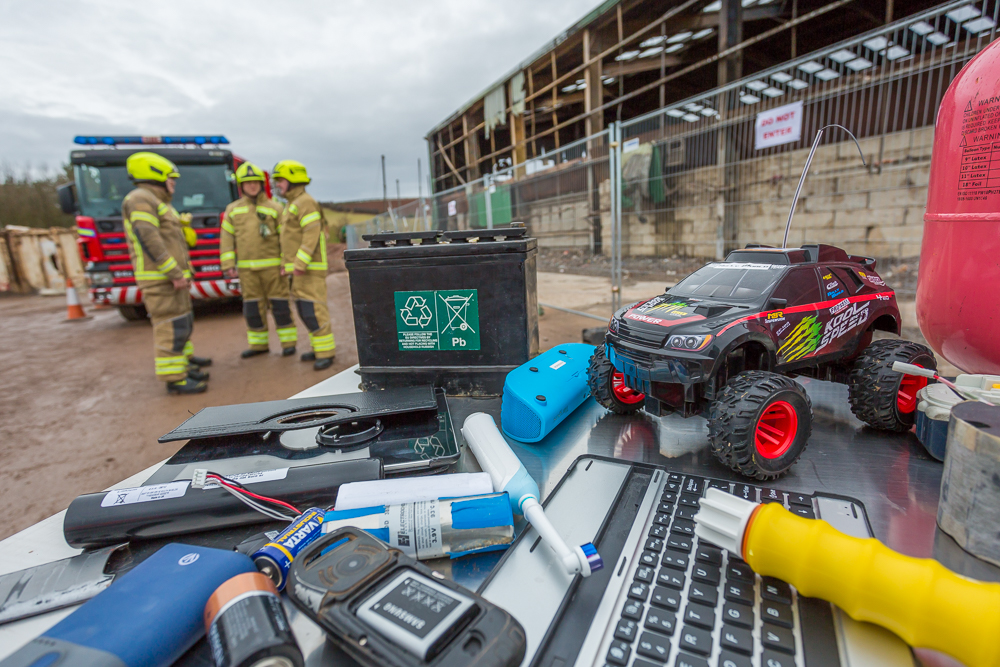 Lithium ion (li-ion) batteries may have been to blame for setting 300 tonnes of refuse on fire last month.

It took over 40 hours and, at its height, forty firefighters and six fire trucks to tackle the blaze in Dunbar on 22 January.

Whilst no one was injured and there was no risk to public health, the Scottish Fire and Rescue Service (SFRS) and Viridor, Scotland’s leading recycling and renewable energy company, has now issued a stark warning highlighting the risks if these batteries are not disposed of correctly.

Li-ion batteries, which Viridor believes are the likely cause of the fire at Dunbar, can be found in anything from children’s toys, alarms, electric toothbrushes and e-cigarettes and are increasing in use across Scotland. When these types of batteries are damaged, it can project a shaft of flame for several minutes and can ignite surrounding waste material.

The Environmental Services Association (ESA), the trade body representing the UK's resource and waste management industry, reports that of the 510 fires reported by ESA members across the UK in 2017-18, a quarter (25%) were attributed to li-ion batteries, up from 20% in the previous year.

Speaking at a fire prevention briefing at Viridor’s Dunbar site, which is rated as Excellent by SEPA, Barry Falgate, Scottish Landfill Manager at Viridor, said:

“With the increasing use of lithium ion batteries in everyday household items, fire risks are growing day-by-day and we’re urging everyone to ensure they put the Right Stuff in the Right Bin and they dispose of batteries safely. This not only keeps our sites safe and helps boost recycling rates, but also prevents the SFRS being called out to potentially avoidable fires.

“Due to the nature of fighting waste site fires, where waste is shifted to gain access to the fire, it is difficult to definitively isolate the cause. Our experience of observing, and extinguishing, fires developing on waste sites leads us to believe this may have been a lithium ion battery. If this had been disposed of correctly, the fire would not have occurred and would have saved the valuable time and resources of the Fire and Rescue Service.

“We would like to thank the Scottish Fire and Rescue Service for their fast response and helping us get the site up and running again so quickly.”

SFRS Group Manager Dean Mack added: "We would always advise that, when disposing of potentially volatile items such as electronics and batteries, the public follow the manufacturer’s instructions carefully."

Experienced waste site staff at Viridor have identified the ‘usual suspects’ of landfill fires (photos attached). These include: