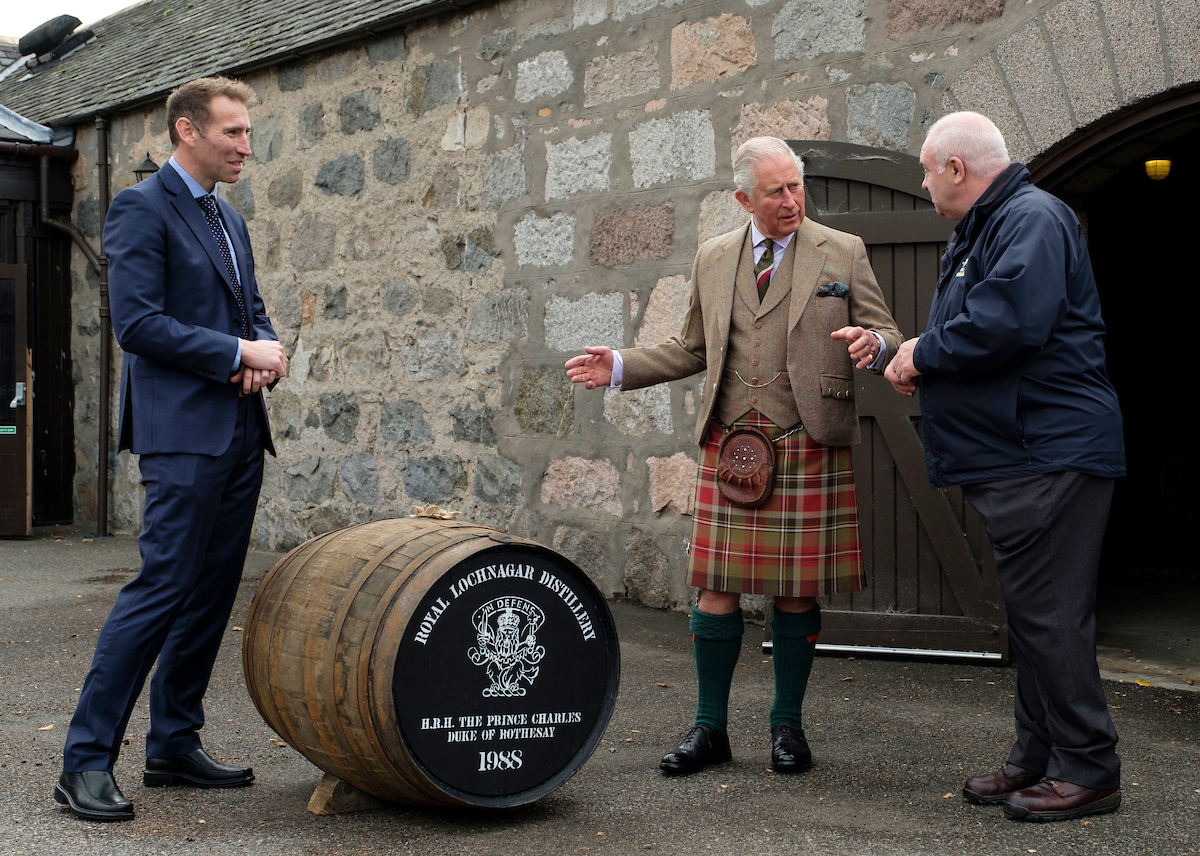 His Royal Highness toured the distillery and met employees, including one who worked at Royal Lochnagar when the cask was filled in 1988, before tasting the whisky. The cask was originally a gift to His Royal Highness to mark the 140th anniversary of the first royal visit to Royal Lochnagar by Queen Victoria and Prince Albert in 1848. The Prince has generously donated the cask to be bottled and sold in aid of his charity, The Prince’s Foundation, and its new project, The Carriage in Ballater, a bistro and tearoom at the village’s restored Old Royal Station.

Diageo director Ewan Andrew, who received His Royal Highness at the distillery, said: “We are delighted to have welcomed His Royal Highness and to formally hand over this special cask, which will become the oldest single cask bottling of Royal Lochnagar Scotch whisky. We are particularly pleased that this will support the local community in Royal Deeside, which is so important to Royal Lochnagar and our people who live and work here.’

Robert Lovie, deputy executive director of The Prince’s Foundation, said: “We are delighted that Diageo and Royal Lochnagar Distillery are enthusiastic about contributing greatly to His Royal Highness’s commitment to restore Ballater to its former glory. We plan to use the funds raised from this special edition Royal Lochnagar whisky to support projects in Royal Deeside such as The Carriage at Ballater Station.”

While visiting Royal Lochnagar, The Duke of Rothesay was invited to fill and sign a new cask that will now be laid down and matured at the distillery for His Royal Highness’s future charitable activity. Ewan Andrew commented: “As we pass on one cask, we are pleased that The Duke of Rothesay filled a new cask that will continue the charitable legacy and support further good causes.”

During the visit, Royal Lochnagar brand home manager Claire Fraser introduced her father Ian Fraser, an operator at the distillery for 32 years, and her grandmother Margaret Finnie, retired distillery secretary and brand home manager, who were both present on the two previous visits by His Royal Highness (in 1995 and 1998 to mark the 150th anniversaries of the distillery and Queen Victoria’s visit).

After unveiling a plaque to commemorate the day, His Royal Highness was presented with a 70th birthday gift, which included a set of coasters, made by the coppersmiths and engineers at Diageo Abercrombie in Alloa using copper from the wash still that would have been in operation at Royal Lochnagar when the whisky was distilled in 1988. They were accompanied by four glasses made by QEST Johnnie Walker Scholar Daniel Durnin, in a box made of larch from The Duke of Rothesay’s Birkhall estate.

The Duke of Rothesay’s cask of 1988 Royal Lochnagar Scotch whisky will be bottled on His Royal Highness’s 70th birthday, 14th November 2018, and details of a ballot, to be run by The Whisky Exchange for the chance to purchase a bottle, will be announced on this date. On tasting the whisky with His Royal Highness and Diageo whisky specialist Maureen Robinson, leading whisky writer Charles MacLean commented: ‘This is a fine expression of Royal Lochnagar with rich fruits, citrus and honey notes, fitting for the occasion.’