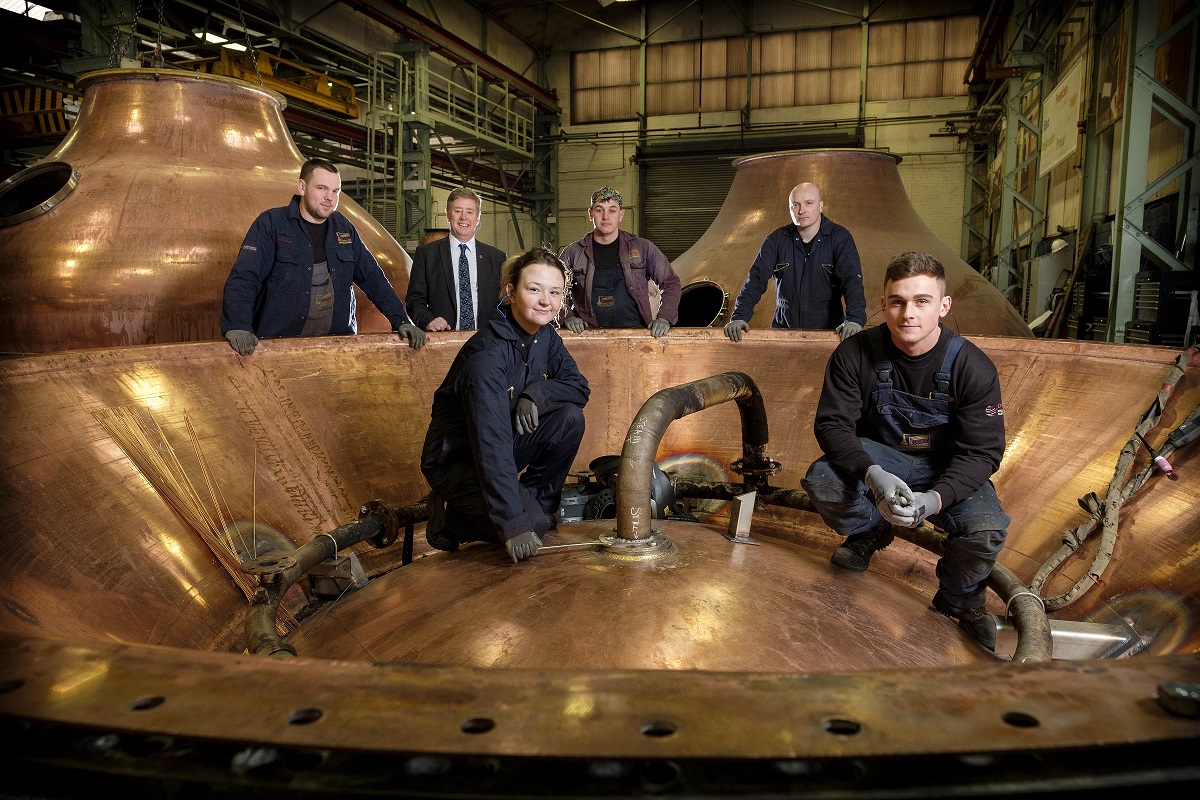 The Cabinet Secretary for Economy, Jobs and Fair Work visited Diageo’s Abercrombie Works in Alloa in the heart of his Clackmannanshire and Dunblane constituency on Monday (5 March) to see first-hand how the apprentices are picking up the hammer and torch of the traditional craft of coppersmithing.

Commenting on his visit, Keith Brown MSP said: “Scottish Apprenticeship Week provides us the opportunity to celebrate the benefits apprenticeships bring to businesses, individuals and the economy and I am delighted to be here at Abercrombie’s who are breaking down barriers by employing Rebecca Weir as the first female apprentice coppersmith in what, up until now, has been a role predominantly filled by men.

“Young people like Rebecca have so much to offer and apprenticeships help create a dynamic and experienced workforce that contributes so much to Scotland’s businesses and industries.

“Apprenticeships are a key way to support young people into sustainable and rewarding careers and I welcome Diageo’s ongoing commitment to apprentices here in Clackmannanshire and across all their sites in Scotland.”

Diageo Abercrombie has created thousands of copper stills since it was founded in 1790, and now employs 43 coppersmiths - some with more than 40 years' service. The current crop of nine apprentices are helping ensure that the growing global demand for Scotch Whisky - and the unique copper stills they are distilled in - is met.

Rebecca made history when she joined Abercrombie as Scotland’s first female coppersmith apprentice and is looking forward to a bright future in the traditionally male-dominated field.

Commenting on the Cabinet Secretary’s visit, Rebecca said: “It was really good to get the chance to show Mr Brown the skills that we are learning during our apprenticeships. I enjoyed telling him about the brilliant opportunities that I have to continually develop my skills, on-site and in the classroom.

“Since beginning my Modern Apprenticeship last year, I’ve gained a true appreciation for the blend of strength, skill and patience required to master the coppersmith trade. I can’t wait to learn more about the essential skills needed to build and preserve the stills which produce Scotch Whisky that is then enjoyed around the world.”

Mr Brown was given a guided tour of the Abercrombie site, which hand-crafts bespoke stills for Diageo’s sites across Europe, by operations manager Charlie King, and witnessed the tried and tested methods which have been at the heart of Scotch Whisky distillation for centuries.