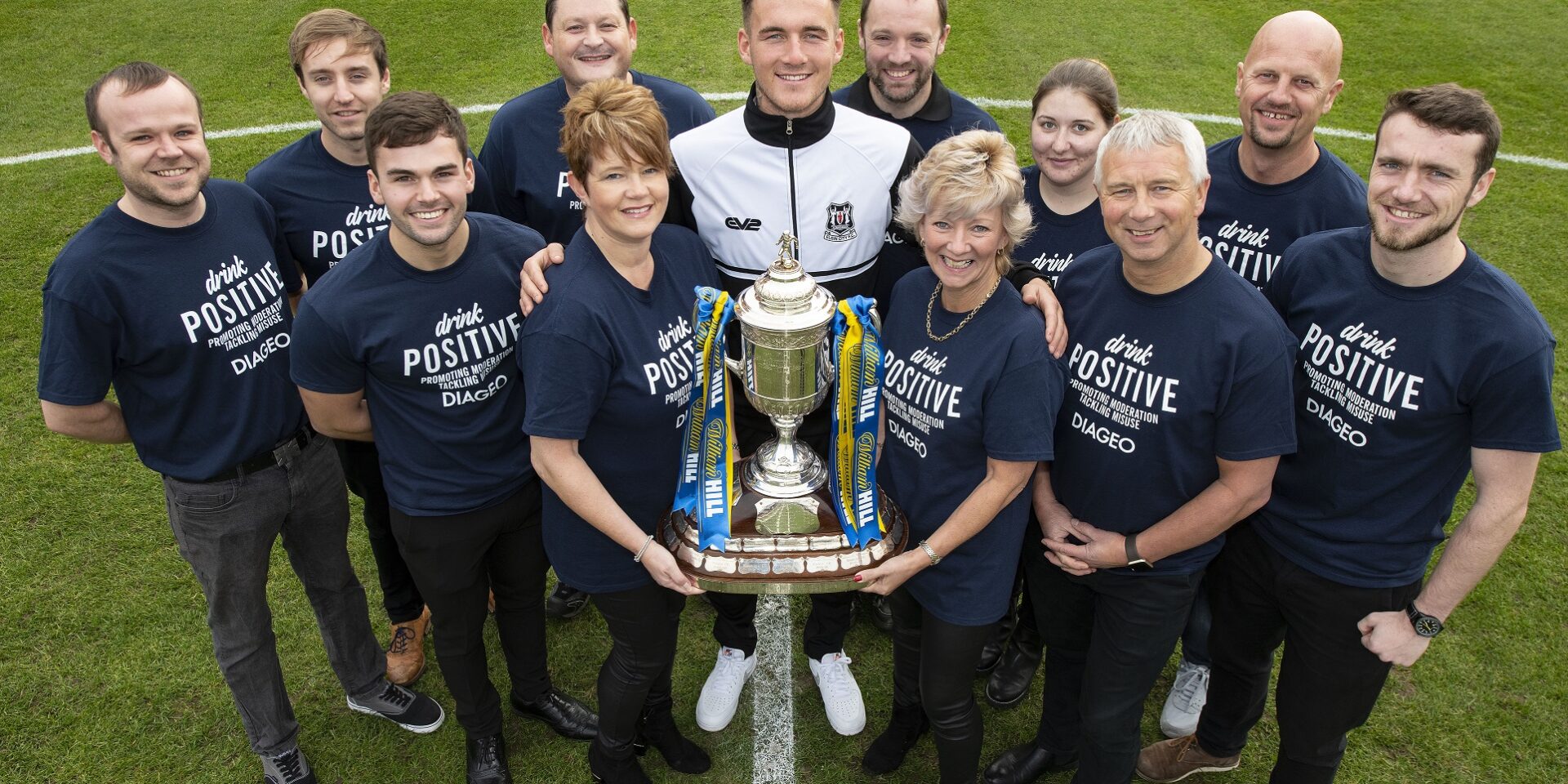 Scotch whisky employees from around Speyside gathered at the Borough Briggs stadium today in support of a new responsible drinking campaign – Drink Positive.

The alcohol education campaign, run in partnership between the Scottish Football Association and Diageo, aims to reach a million Scots with responsible drinking messaging. Using the William Hill Scottish Cup as a platform, the campaign will educate football fans, coaches and players on the effects alcohol has on the body, kitting them out with facts on how to lead a balanced lifestyle.

Joined by Elgin City FC players and Chairman Graham Tatters, the group were given the unique opportunity to see the Scottish Cup Trophy up close, as part of a special tour to engage football fans in Speyside with the Drink Positive campaign.

Graham Tatters, Chairman of Elgin City FC, said: “Football plays an integral role in communities across Scotland, none more so than in Elgin where our flourishing soccer classes attract hundreds of people every year.  As such the Club and all the coaches believe we have a collective responsibility to use the platform we have to promote a balanced approach to alcohol consumption.

“It’s important for our supporters and players to recognise the dangers of excessive drinking and we hope we can help to spread the responsible drinking message.”

Scottish League Two team Elgin City FC will join first round winners Rothes FC in the second round of Scotland's most prestigious football knockout competition, the William Hill Scottish Cup. Both local Speyside teams will play their matches at home this Saturday (20 October).

Ahead of the second round matches, Elgin City FC’s Club Captain Jon Paul Mcgovern said: "It’s an exciting time for us as we enter the second round of the Scottish Cup and spirits are high across Moray with the local teams playing at home this weekend.

“We know that alcohol and watching football are a common pairing so it’s important for us to support Diageo and the Scottish FA in conveying such an important message. Using my own knowledge and experience, coupled with the Drink Positive information, I hope to encourage not only my teammates, but our loyal fans, to help tackle alcohol misuse.”

Speyside is at the heart of Diageo’s Scotch whisky distilling business, with over 400 people employed across its 23 sites in the region. It’s hoped that by welcoming the trophy tour to Speyside, staff will be encouraged to become Drink Positive ambassadors, taking the responsible drinking message to friends and family.

Charles Ireland, General Manager for Diageo GB, Ireland & France, said: “We want people to really understand the effects of alcohol misuse and encourage them to drink in moderation.

“Football has the power to reach and connect thousands of people across the country, and for our voice to be heard within this group is massive. Working with the Scottish FA will allow us to harness that power and use this opportunity to positively transform the way people think about and drink alcohol in Scotland.”

The Drink Positive campaign, which launched in September, will provide alcohol awareness training to amateur football coaches across Scotland to equip them with information on how alcohol impacts sporting performance. Through this training, they can build responsible drinking messaging into every coaching session, reaching tens of thousands of amateur players across the country.

Fans will also be targeted with media messaging and engagement to raise their awareness of the harmful effects of alcohol misuse through the DrinkIQ website (www.drinkIQ.com), which delivers engaging alcohol education, including alcohol unit and calorie calculators to encourage people to drink in moderation.