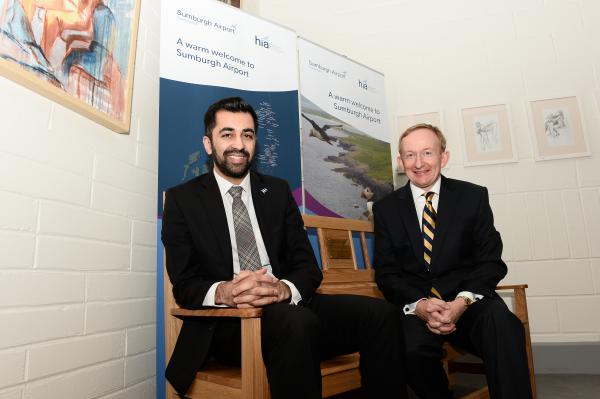 HIAL has invested more than £7.85million over three years to create a faster, smoother airport experience for passengers. Improvements include larger security screening areas and upgrades to the main departure lounge.

The Restin Chair is the traditional bench (settle) which most homes in Shetland had in the past. This was the chair which was offered to visiting guests. The chair was produced by local crafts business Paparwark Furniture and is hand made in oak.

Sumburgh Airport is the main airport serving Shetland and is situated approximately 25 miles south from the main town and port of Lerwick. The airport provides air links to Scotland’s major cities, Orkney and Norway and also supports the North Sea oil and gas industry via its heliport operations.

The first phase of HIAL’s investment undertaken in 2014, saw major improvements to facilities for the energy sector including the refurbishment of several hangars, a new offshore lounge and briefing facilities and a dedicated area for offshore workers. Oil and gas industry clients include Shell, BP, Total, Fairfield and EnQuest, with Statoil also starting flights from Sumburgh later this year.

The second – and recently completed - phase caters for scheduled passengers, with improved check-in, security and baggage reclaim facilities and refurbishments to the terminal concourse.

The international and oil related passenger arrivals and offshore transit lounge have also been refurbished.

Improvements have also been made to the airport fire station and air traffic control tower.

HIAL chairman Mike Cantlay, said: “Sumburgh Airport is a vital part of the oil and gas industry’s logistics network and is well placed to benefit from continued activity both to the west and east of Shetland that will see a significant upturn in both rotary and fixed wing oil charter activity.

“In addition, the airport plays a key role in enhancing connectivity for the Islands’ population and allowing thousands of visitors to explore the region.

“The team at Sumburgh, led by airport development manager Andy Gower, has developed facilities which will meet the expectations of both scheduled and oil industry travellers including efficient transfer between helicopter and fixed wing aircraft and vice-versa.”

Scottish Government Minister for Transport and the Islands, Humza Yousaf, said: “I’m very pleased to be part of the official opening of these fantastic new facilities, marking the completion of the second phase of improvement work at Sumburgh Airport.

“The airport plays a vital role for the oil and gas industry, as well as Shetland’s wider connectivity, and has seen a significant rise in passenger numbers and aircraft movements in recent years. These new facilities will improve the passenger experience and help ensure the airport can continue to grow in the future.

“I look forward to watching Sumburgh Airport reap the benefits of this improvement project and continue to build on its recent success.”