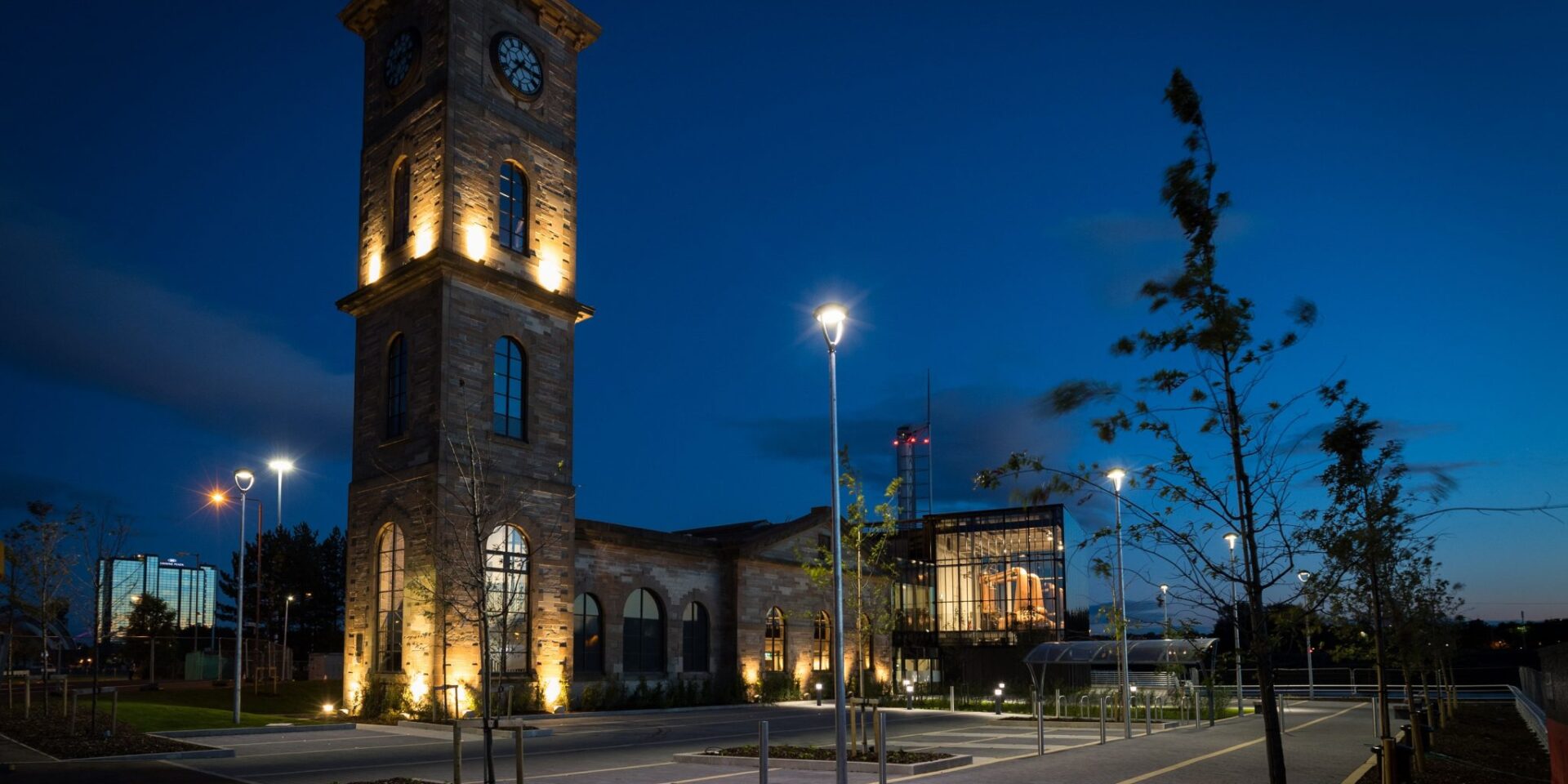 The distillery, between the Riverside Museum and SSE Hydro, is now producing the first spirit in the area for more than 100 years.

Sitting on the site formerly known as The Queen’s Dock, once the beating heart of Glasgow’s shipping industry, The Pump House, with its famous clock tower, includes a 5-star visitor centre with interactive whisky experience, shop and café. The stunning copper stills sitting pride of place will produce a high quality Lowland single malt Scotch whisky.

Glasgow’s links to the whisky industry have been brought to life through words, pictures and film as visitors make their way through 140 years of history as part of a self-led and guided tour. The Pump House once controlled entry into The Queen’s Dock, one of the city’s most famous shipping ports built by Morrison and Mason in 1877. This ensured Customs and Excise could keep a close eye on goods in and out, including Scotch whisky.

The project to transform The Pump House into an operational whisky distillery began in 2012 and has been spearheaded by Tim and his son Andrew, the distillery’s Commercial Director.

Tim Morrison said: “This is an exciting day for Glasgow and the Scotch whisky industry. After more than a century copper stills are producing spirit on the banks of the Clyde and we’re incredibly proud to be able to open our doors to the public.

“Glasgow has an affinity with Scotch whisky unlike any other city in the world with The Queen’s Dock previously witnessing the exports of whisky with ships sailing past the Pump House destined for all continents of the world.

“Of course for me and my family there is a very personal link knowing that my great grandfather built The Queen’s Dock where The Clydeside Distillery now sits. We’re looking forward to the future and seeing whisky produced in the heart of Glasgow once again.”

Andrew Morrison said: “This project has been a labour of love and I’m very proud to see The Clydeside Distillery now open. Today marks the culmination of a long-standing vision to put Glasgow back on the Scotch whisky map.

“We are passionate about using traditional methods to produce our whisky, albeit with a bit of modern technology. We’re combining this with the skills of our distillers to ensure we stay true to the techniques employed for hundreds of years.

“We want to welcome everyone, from Glasgow natives and Scottish whisky lovers to international whisky enthusiasts, tourists and those who are visiting the city. Glasgow has a long and special relationship with Scotch whisky and our visitor experience will bring this to life.”

Hypostyle Architects were appointed to design the building, creating something which successfully captures both old and new elements of its Clydeside location. Builders McLaughlin and Harvey and project managers Thomas & Adamson have worked closely with the team throughout the project with Bright3D creating a unique visitor experience.

The two copper stills, each weighing around two tonnes, were crafted by the internationally-renowned Scottish coppersmiths, Forsyths of Moray and delivered to the site in March.

Around 25 jobs have been created at The Clydeside Distillery with Alistair McDonald, Distillery Manager, using over 30 years of knowledge and experience to oversee all aspects of whisky production.  Having previously worked for Beam Suntory as Distillery Manager at Auchentoshan, Islay-native Alistair, began his career as an Apprentice Distillery Engineer at Bowmore Distillery. As Visitor Centre Manager, Bridgeen Mullen will manage the day-to-day running of the attraction which includes a team of tour guides, as well as the retail and catering teams.

The distillery is also capable of hosting a variety of events, from wedding receptions to corporate drinks functions and dinners. The tasting room, located on the mezzanine level, opens up to create a stunning, bespoke space for 40-200 guests.