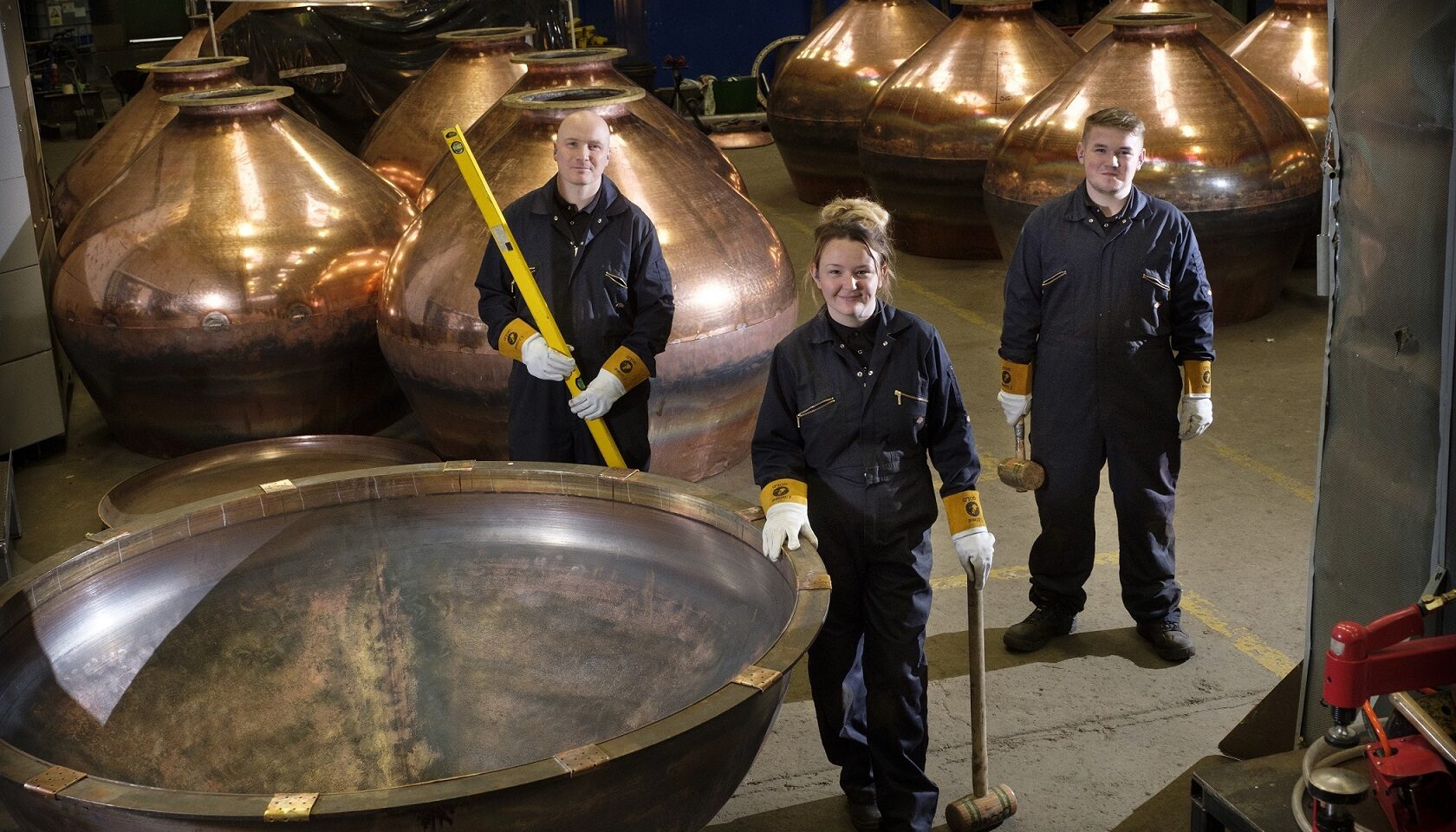 Rebecca Weir, 18, from Alloa has been recruited by Diageo Abercrombie as a first year Modern Apprentice and is believed to be the first female recruit into the coppersmith trade in Scotland.

She is part of the latest apprentice intake at Diageo Abercrombie alongside 16-year-old Calum MacTaggart from the famous whisky island of Islay, and Steven Key, who at 34 is a mature apprentice recruit.

For centuries coppersmiths have used the same tried and tested methods to make the famous stills which are at the heart of Scotch whisky distillation.

The apprentices will learn how to hand-beat copper sheets and weld them into whisky stills, as well as being trained in state-of-the-art computer aided design techniques, mastering a blend of strength, skill and patience.

Rebecca, who hopes to have a bright future in the traditionally male-dominated field, gained the coveted spot on the Abercrombie apprenticeship programme following an impressive interview. The former Alloa Academy pupil said: “My guidance teacher told me about the apprenticeship opportunities with Diageo. I thought it sounded like a really interesting route and I knew I had to go for it. I wasn’t put off by gender stereotypes – I don’t think that should stop anyone from doing what they want to do.

“It’s really exciting to be part of something which is so important to the whisky industry. I can’t wait to get stuck in and learn more about the essential skills needed to build and preserve the stills which produce some of the world’s most-loved Scotch whisky.”

Rebecca joins a vanguard of female distillers, engineers, blenders and brand ambassadors at Diageo, hoping to inspire other women to join the industry. At Diageo in Scotland, a quarter of all its apprentices are female; 17% of the malt distilling workforce is female and 40% are in management roles, reflecting the company’s focus on diversity in its workforce.

Abercrombie, which hand-crafts bespoke stills for Diageo’s sites across Europe, is experiencing one of the largest peaks in demand for its specialist engineering services in its history. While a traditional product, Scotch is still innovative and new ranges – which require a diverse range of stills in different shapes and sizes - are constantly being launched.

Steven Key, a mature apprentice at 34, said: “I was a warehouseman with Diageo when this opportunity came up so I knew exactly what coppersmiths did and just how important the craft is to the industry. It’s great to see that they’re willing to give me a chance, at my age, to go for a modern apprenticeship.”

The training, which integrates college qualifications with hands on experience, will allow the apprentices to learn about the traditional coppersmith craft which has been passed from generation to generation.

Calum MacTaggart spoke of how Diageo is helping to foster a new generation of talent. He said: “Being from Islay, I’ve grown up surrounded by so many famous and inspiring distilleries, and so whisky has always been something I’ve had an interest in. It’s such an exciting prospect to think that I’ll be contributing to the next generation of Scotch.”

Diageo Abercrombie has created thousands of copper stills since its creation in 1790, and now employs 43 coppersmiths at its site in Alloa - some with more than 40 years' service - with a further nine apprentices to help ensure that the growing global demand is met.

Mentor and operations manager at Diageo Abercrombie, Charlie King, said it has been his career’s ambition to encourage young people to consider a coppersmith career. He said: “There’s a strong relationship between stills and flavour, meaning our work is tailored to each specific project and so almost no part of the craft can be automated.

“The traditional coppersmith skills take 10 years to master but once mastered, it’s a career to last a lifetime. If there were to be a gap in skills, the trade would be lost forever – you can’t learn this out of a book – so you can see how important it is for us to nurture the next generation.

“As a company, we look to give opportunities to anyone who deserves them and these three budding apprentices were definitely the right candidates for this year’s programme.”

Diageo Abercrombie is Scotland’s oldest copperworks. Hoping to inspire a generation of young coppersmiths and keep the craft alive, Diageo Abercrombie offers around two apprenticeships every year, with a further 18 engineering opportunities at its sites across Scotland.