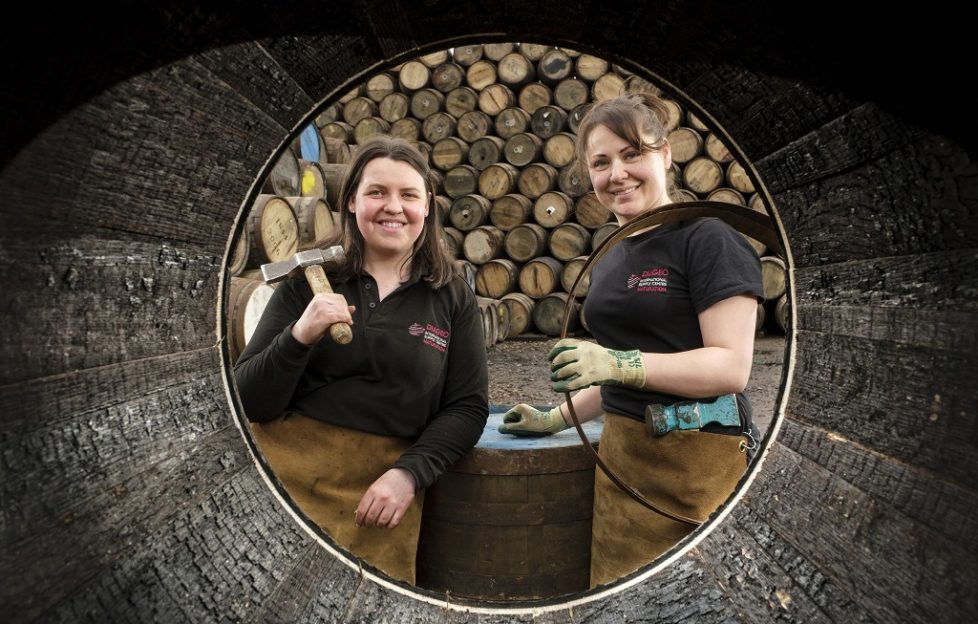 The ancient craft of creating oak casks has been part of Scotch whisky for centuries, but the industry yesterday celebrated a new first with the recruitment of two female coopering apprentices.

First-year coopering apprentices Angela Cochrane and Kirsty Olychick – recruited by leading Scotch distiller Diageo at its Cambus Cooperage in Clackmannanshire - are breaking down the gender barriers and blazing a pioneering trail in the once male dominated trade.

The news marked the start of Scottish Apprenticeship Week, with Diageo celebrating having women employed in every part of its business in Scotland, from senior management roles, to distillery managers, master blenders, electrical and mechanical engineers, and in the traditional crafts of coppersmith and coopering. Last year Diageo celebrated another diversity break-through in a traditional whisky craft when Rebecca Weir became the first female apprentice at the company’s Abercrombie Coppersmiths.

Angela and Kirsty are part of team of 16 coopering apprentices in the Coopering School at Diageo Cambus, learning the tried and tested skills that have been used for centuries to make the oak casks for the maturation of Scotch whisky. The physically demanding four-year apprenticeship, which integrates theory with hands on experience, will allow the apprentices to master the traditional hand-craft skills of the cooper.

Former psychiatric nurse, Angela Cochrane, 31, gained the coveted spot on the Cambus Cooperage apprenticeship programme after noticing the advert on Facebook. She said: “I researched a bit about the trade online and thought it sounded like a really interesting career option, so I knew I had to go for it. It’s a lot more complex than I thought it would be and I’m knackered when I get in at night but everything from handling the barrels to swinging the hammer is already starting to feel a lot more natural.

“I’ve never been put off by gender stereotypes. I don’t think that should stop anyone from doing what they want to do. And knowing you’re contributing to the growing whisky industry is an amazing feeling.”

Kirsty Olychick, 38, left her home in Canada to pursue a career in the Scotch whisky industry.

She said: “I’ve always been inspired by the Scotch industry, so it is something I’ve always wanted to be involved in but living in Canada I hadn’t ever been exposed to the coopering craft. Having family members who’d previously completed trade apprenticeships helped give me the confidence to go for it. My dad always told me that if I had an opportunity to get into a trade I should jump on it.

“I like the fact that you learn the skill by hand – you get the satisfaction of seeing the job done rather than reading about it in a book.

“Coming into a male-dominated workplace didn’t put me off at all, in fact I found it really empowering to be one of the first women to take up the craft and make my mark in history. It’s such an exciting prospect to think that I’ll be contributing to the next generation of Scotch. You shouldn’t let anything hold you back.”

Having started in the industry as an apprentice himself, and spending the next 30 years mastering the craft, coopering tutor John Carberry is helping to foster the next generation of talent.

He said: “It’s been brilliant for everyone here to welcome Angela and Kirsty to the Cambus Cooperage team. They’ve made a great start to their coopering apprenticeships and it’s a pleasure to help tutor them.

“There is incredible precision involved in the cooper’s craft. Our apprentices need to master a blend of strength, skill and patience, learning how to hand repair casks with no glue or nails, as well as calculate different oak depths, ratios and specific measurements.

“The craft of making and rejuvenating the casks is something that has to be cultivated and refined so it’s great to see our apprentices are so passionate about the craft. The traditional coopering skills take 10 years to master but once mastered, it’s a rewarding career which will last a lifetime.

“While a lot has changed since Cambus opened its doors, the core skills have stayed the same. You can’t learn this out of a book so you can see how important it is for us to nurture the next generation.”

Ewan Andrew, Director of Diageo International Supply Centre, said the recruitment reflected the efforts across the company to enhance inclusion and diversity across all areas of its operations in Scotland.

He said: “We’re delighted to have recruited Angela and Kirsty and celebrate the landmark of having our first women in the coopering trade. But this is just the start of the journey. Across every part of our business we want to go further and faster in making diversity and inclusion a reality.”

Diageo has invested significantly in its coopering operations in Scotland in recent years, opening the £10 million state-of-the art Cambus Cooperage in 2011.

Drawing on generations of skill and knowledge, and combining it with the state-of-the-art engineering, the cooperage is now able to process more whisky casks than ever before, producing over 400,000 casks each year to be used to mature spirit from Diageo's portfolio of single grain and single malt distilleries.