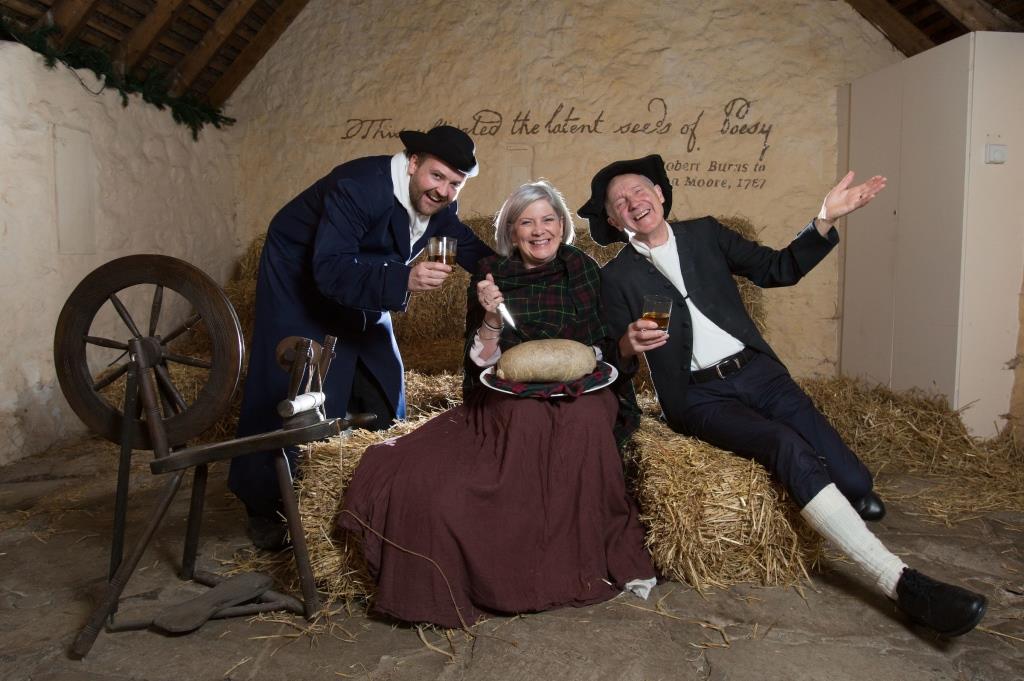 People across Scotland are invited to Burns Cottage in Alloway, which will be lit up in spectacular fashion on Saturday 27 January in celebration of the much-loved poet.

This is sure to be a fantastic way to banish the January blues, as the unique sparkling tour begins at Burns Cottage.  Visitors will all get their own special maps and experience first-hand the place that Burns called home, including the brand new misty pond. The journey will continue through an illuminated poet’s path, before crossing the railway bridge into the auld kirk graveyard where surprises are in store for unsuspecting Burns fans.

Visitors will then make their way back to the Robert Burns Birthplace Museum, which will host an array of entertainment including live music and children’s crafts The famous Robertson’s Room Bar will also be offering the very best Scottish food and drink for everyone to enjoy. This year, this special evening will conclude with a spectacular finale as a large John Barleycorn sculpture is set alight to the sounds of tribal drums.

Guests will also get the chance to take part in an exciting global virtual toast to our national Bard by posting an image of their Burns celebrations on Facebook, Twitter and Instagram using #CheerstoRabbie. Those images will be brought together on Scotland.org to show Burns fans toasting the poet from every corner of the globe.

Organisers of Burns Alicht have also taken the opportunity to celebrate Scotland's Year of Young People by releasing a limited number of FREE tickets for people aged 8-26.

“The special illuminations and exciting entertainment at Alloway’s iconic landmarks will undoubtedly come alive at Burns Alicht - one of the best events in Scotland at which to celebrate Scotland’s most famous poet.

“Burns Night is one of Scotland’s most well-known and best loved national days, celebrated by millions around the world. Every year on January 25th, the day of his birth, Scots, and Scots at heart remember the life and cultural legacy of Burns by attending events across the world, and Burns Alicht promises to be a great one.

“The #CheerstoRabbie campaign will also give people across the country the opportunity to join thousands across the globe who will toast the national Bard whilst enjoy food, poetry and celebrations, raising a glass to Burns from every corner of the world.”

Councillor Brian McGinley, South Ayrshire Council’s Portfolio Holder for Economic Development, Tourism and Leisure said, “South Ayrshire is proud of its ties to Robert Burns’ birthplace and promotes the history and legacy of the national Bard to an international audience.

“Now in its tenth year, Alloway 1759 attracted 3,000 visitors in 2017 with more than 1,000 taking part in the spectacular Burns Alicht, making it a significant date in Scotland’s cultural calendar and an important event for the local economy.

“We’re looking forward to welcoming people from across Scotland and farther afield to enjoy a programme which also includes the Robert Burns Humanitarian Award, a unique Burns Supper in Burns Cottage, and the Burns Big Birthday Bash.”

As part of Scotland’s Winter Festivals, dozens of cultural events are taking place up and down the country to showcase the best of Burns. With funding support from the Scottish Government, the programme of events features everything from traditional recitals and ceilidhs to suppers and music performances.

The full programme of this year's Burns events is available at scotland.org/events/burns-night.

Tickets for Burns Alicht are available via thegaiety.co.uk or 01292 288235 and visitors aged 8-26 can apply for free tickets by contacting nicole.drummond@south-ayrshire.gov.uk.