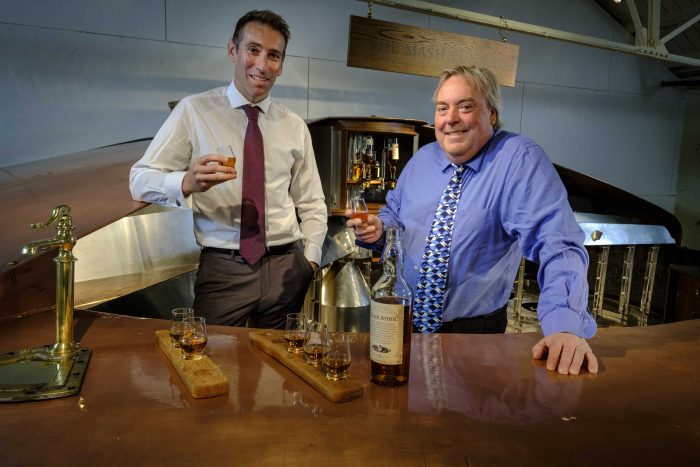 Scotch whisky tourism has enjoyed another boom year with more visitors than ever before making the pilgrimage to Diageo distilleries across Scotland, according to new visitor figures released today (Thursday 6 July).

This continues a trend of consistent year-on-year growth in visitor numbers over the past decade, with Diageo’s distilleries now attracting more than double the number of people they did eight years ago.

The latest figures were announced at Blair Athol Distillery in Pitlochry, Diageo’s busiest Scotch attraction last year with a record 75,234 visitors – an increase of 7.7% on the previous year. The distillery also celebrated the unveiling of a unique new whisky tasting bar which is set to become a magnet for whisky lovers and tourists.

Malcolm Roughead, VisitScotland Chief Executive, officially opened the new bar at Blair Athol and raised a toast to the Scotch whisky industry for the contribution it makes to tourism growth.

He said: “Whisky is one of Scotland’s most valuable commodities, with visitors from all over the world coming to our shores to experience an authentic Scottish dram. Scotland’s reputation as a quality destination relies on continued investment and innovation. This new whisky tasting bar at Blair Athol is a fantastic example of how the industry is working to attract new visitors and continue its vital contribution to the Scottish economy.”

Diageo Scotland Director, Ewan Andrew, joined Mr Roughead to open the bar and announce the record-breaking figures. He said: “Scotch whisky is not only the country’s most valuable export industry, it’s the world’s most popular spirit, attracting visitors from around the globe to Scotland. That’s great for our distilleries but it also makes a major contribution to the local economies and communities where we operate.

“We have seen visitor numbers increasing rapidly over recent years as global Scotch sales have grown, and we’re investing to ensure Scotch continues to grow and that we welcome even more visitors to Scotland in the years ahead.”

Diageo is the leading provider of Scotch whisky tourism experiences in Scotland, running 12 distillery visitor centres across Scotland, from Glenkinchie near Edinburgh to iconic distilleries such as Lagavulin and Talisker in the western isles to Clynelish and Glen Ord in the north highlands and with other famous names such as Dalwhinnie, Cardhu and Royal Lochnagar in between.

The company is investing steadily to improve the distillery visitor experience, with one example being the new Scotch whisky tasting bar at Blair Athol. The stunning new addition to the distillery takes the concept of a whisky tasting bar to a whole new level, serving Diageo’s finest drams in a setting which is the embodiment of the art and craft of Scotch whisky-making.

In one of the most innovative examples of “up-cycling” seen in the Scotch whisky industry, coppersmiths from Diageo Abercrombie in Alloa, who are usually employed making copper potstills for whisky production, took a redundant mash tun – a massive cylindrical copper and cast-iron vessel used in whisky distilling – and transformed it into the bespoke whisky tasting bar which will now be the centre-piece of Blair Athol’s visitor centre.

The concept for the bar was created by Great Brink, a cutting-edge Edinburgh-based design and production consultancy, who worked with the coppersmiths to re-imagine the mash tun into a magnificent, experiential tasting bar.

James Strong, who led the design team, said: “It was a true privilege for our team of artisans to work with Diageo’s coppersmiths on this project and a joy to see our design for the bar brought to fruition by exceptional craftspeople.

“To maintain authenticity we repurposed as many of the original features of the mash tun as possible, from the copper top and cast iron walls to the ‘lauter’ arms and brass windows, all have been used as details which make this an exceptionally intricate, purpose-built Scotch whisky bar.

“It’s been really gratifying to see this piece of heritage distilling equipment, which had completed its working service making whisky,  given a new lease of life serving the product it was once part of creating.”

Jill Scougall, Blair Athol Distillery Visitor Centre Manager, said: “We aim to immerse our visitors in every aspect of the art of making Scotch whisky from distilling to tasting. Having a whisky bar, hand-crafted by our coppersmiths from old distilling equipment is something special, and will add to the visitor experience in a way we hope will delight and inspire new generations of whisky lovers.”

Alex Begg, the senior charge hand coppersmith who oversaw the work on the bar, said: “Our trade is making copper stills and equipment for the production of Scotch whisky, so it was a bit of a change to be asked to create a piece of equipment for serving the final product. Although we used many of the same skills and techniques we employ when making copper stills to sculpt the copper surface of the bar. We hope it will be enjoyed by everyone who visits Blair Athol.”

The mash tun which was used to create the bar was originally from Diageo’s Clynelish Distillery in Brora on the north east coast of Scotland. It had been replaced during a major refurbishment of the distillery and rather than scrap it, the decision was taken to transform it into the Blair Athol tasting bar.

The bar will be open to the public from Friday 7 July 2017, serving a selection of products from Diageo’s Special Release Range, including rare and exclusive bottlings.