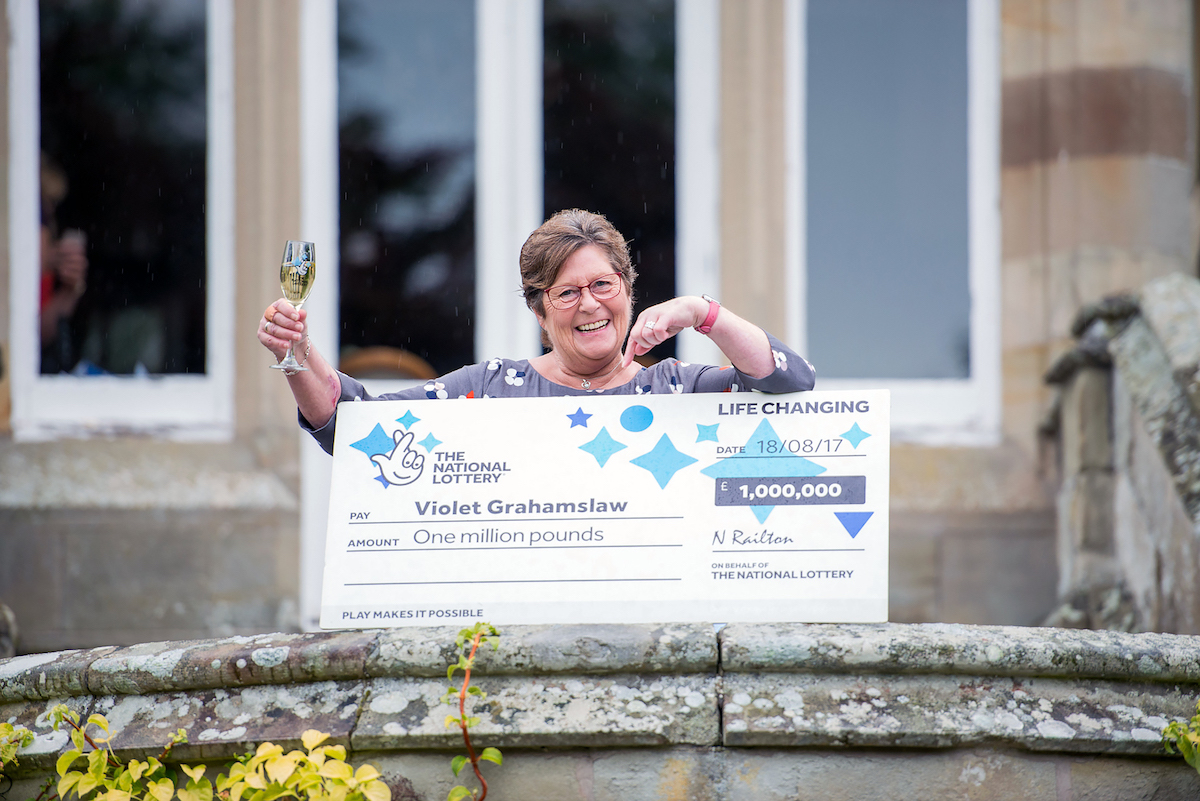 A retired care worker and keen knitter from Berwick-upon-Tweed has scooped a staggering £1,000,000 in the EuroMillions UK Millionaire Maker draw on 18 August 2017. She now has enough money to buy thousands of rolls of wool to fund her knitting for years to come.

Violet Grahamslaw (63) only discovered that she had won the life changing amount after finding a pile of unchecked lottery tickets and sending her husband John (68) to the local store to see if any of them were lucky.

Violet explains: “As soon as John returned from the shop I knew something had happened with one of the tickets – he was shaking, chalk white and kept saying ‘call this number, call this number’. When Camelot confirmed that I had won £1 Million I just couldn’t believe it and I think I went into shock.

“The first person I called was my mum, who got a little confused and kept telling everyone I had won £1,000 and not £1 Million! I then called both my children, Paul (33) and Tanya (31), who couldn’t believe their ears but were completely over the moon for me.

“It still hasn’t properly sunk in yet and I can’t believe that this has happened to me. I’ve been playing the lottery since it started in 1994, buying my tickets from the same shop every week, so it doesn’t feel real that I have actually won such an incredible sum of money.”

Speaking about what she plans to do with her winnings, Violet added: “We’re in desperate need of a new kitchen so that is definitely first on my list, closely followed by a living room makeover and maybe some other rooms in the house too. I think I’ll also treat the kids and take the whole family on holiday to celebrate.

“Since retiring three years ago from Tweedview Residential Care Home I have been doing a lot of knitting and dress making, so I’ll be treating myself to a brand new sewing machine.”

Violet bought her winning ticket from her local Mace store on Castle Street, Berwick-upon-Tweed. Her winning code from the EuroMillions UK Millionaire Maker draw on Friday 18 August 2017 was VSQC12577.

The National Lottery changes the lives of winners like Violet as well as communities across the UK – players raise, on average, over £33m for National Lottery-funded projects every week. In Northumberland alone there have been 3,316 individual National Lottery grants made to date, funding projects across the arts, sports, heritage, health, education, environment, charity and voluntary sectors.

In Violet’s own back yard of Berwick-upon-Tweed, National Lottery funding has helped: