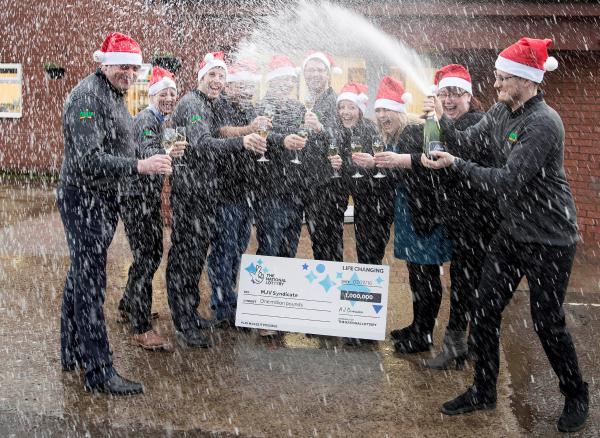 Each member will now receive a minimum of £62,500 – just in time for a spectacular Christmas shopping spree.

The MJV Syndicate – named after the group’s place of work, MJVentilation in Coupar Angus – only started playing together in February 2016 so they couldn’t believe their luck when they found out they’d won the life changing amount.

Syndicate leader, Darren Graham (35) said: “I can’t believe it – and I’m still in shock! We’ve all worked together for a number of years but only decided to start the syndicate earlier this year; to win £1M in such a short time is truly amazing.”

Speaking about how he discovered that the group had won, Darren added: “I nipped into the local SCOTMID to check our tickets and the sales advisor said that we’d ‘won a substantial amount of money’ on one of them. I asked how much but she couldn’t tell me and advised that I phone the claim line. I remember having a laugh with her at that point and jokingly saying ‘maybe I’ve won the jackpot’ – little did I know!”

Darren continued: “I decided to check the results online first to see if I could get any answers. As soon as I saw the matching UK Millionaire Maker code I realised and it suddenly hit me – we’d just won £1M! Even though I could see it plain as day, I still couldn’t, or wouldn’t, let myself believe it. I kept second guessing it and thinking that there was going to be a catch.

“I told the rest of the syndicate members at work on the Monday (5 December) and that’s really when it sank in. Their reactions were so different, from jumping up and down while screaming, to complete and utter disbelief. That was such a special day in the office, but I was still getting asked if I was joking at 5pm!

“We’ve all been on such a high that none of us have really had a chance to think about what we’re going to spend our winnings on. Personally, I’ll definitely be looking into putting a deposit down on a new house. As a group, I think this is going to be a pretty spectacular Christmas and New Year – although, I don’t think the presents under the Christmas tree are going to be nearly as good as this one!”

The MJV Syndicate played EuroMillions every Friday, purchasing 16 Lucky Dip tickets – one for every syndicate member. The group purchased their winning ticket from the SCOTMID Co-operative at The Cross, 1/3 Commercial Street, Coupar Angus. Their winning code from the EuroMillions UK Millionaire Maker draw on Friday 2 December 2016 was MBHQ82548.

The National Lottery changes the lives of winners like the MJV Syndicate as well as communities across the UK – players raise, on average, over £30m for National Lottery-funded projects every week.