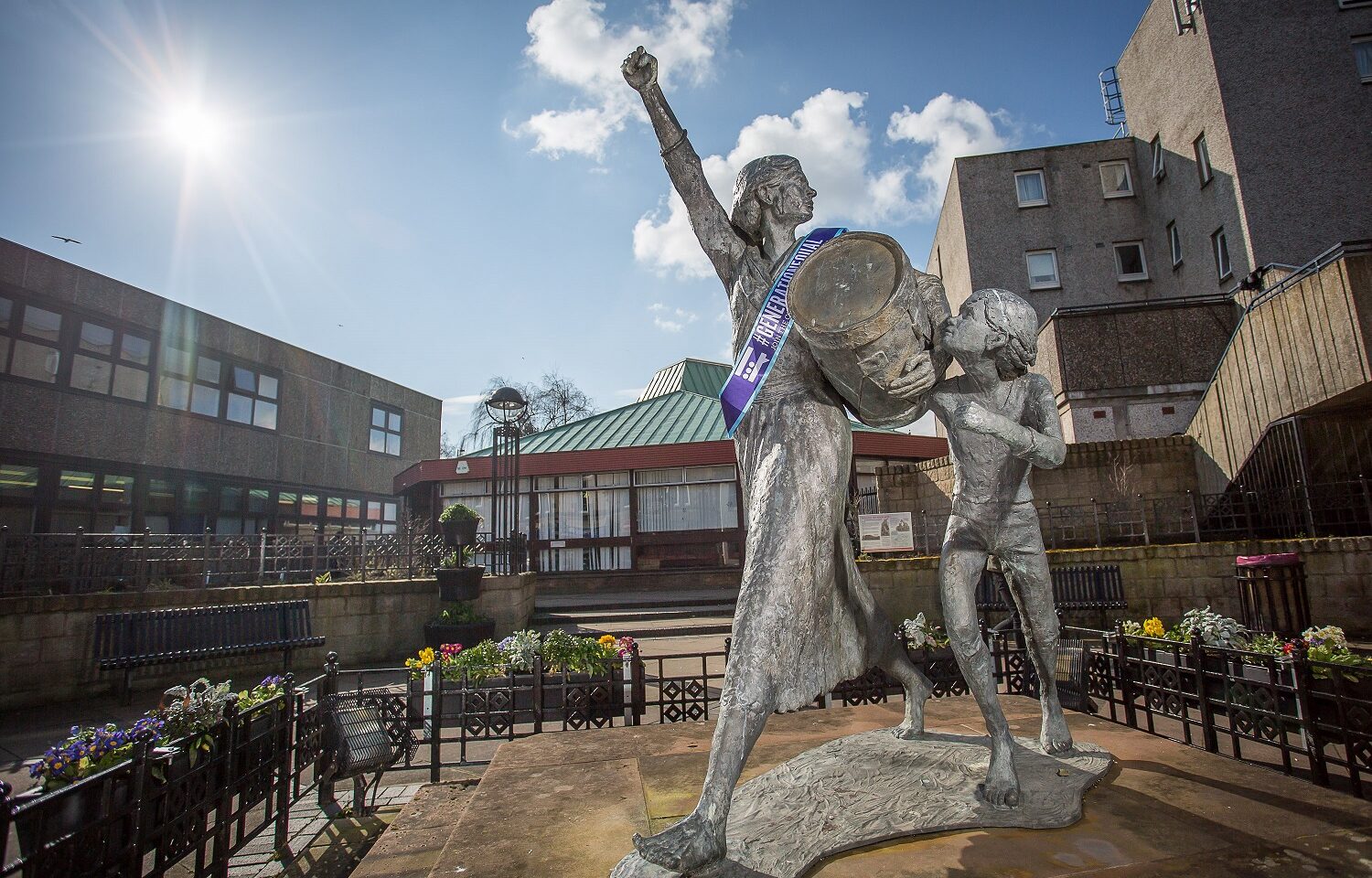 14 statues depicting important and pioneering women across Scotland were adorned with #GenerationEqual sashes today (Friday 6 March) in a show of solidarity towards gender equality, ahead of International Women's Day (8 March).

Working in partnership with Local Authorities, Councillors and site owners throughout Scotland, The First Minister’s National Advisory Council on Women and Girls (NACWG) staged the progressive stunt to highlight the scarcity of statues celebrating women in history and their society-changing accomplishments, and drive forward the gender equality movement.

Putting a spotlight on some of the inspiring women already recognised in stone and steel, The NACWG embellished statues and sculptures in nine cities, towns, villages and burghs across Scotland, championing equality for all with the #GenerationEqual slogan – including the statue of Philanthropist Isabella Elder in Glasgow, the statue of social activist Helen Crummy in Edinburgh, the ‘Fisher Jessie’ statue in Aberdeenshire, celebrating the lives of women in the fishing community, and the Land Girls sculpture in Moray honouring the work of the Women's Land Army – which will remain in place throughout the weekend. The NACWG is also urging members of the public to put a spotlight on the inspirational women they think should be commemorated for their achievements.

NACWG Co-Chair Louise Macdonald OBE, said: “For generations, our history has been written by one gender. One perspective, one vision, one half of the population. Half of our history is missing.

“We want to highlight this huge inequality by showcasing some of the statues that do exist and call for better recognition of the women who have made a lasting impact through their bravery, intelligence and actions

“Women are not niche; we are half the world and 52% of the population in Scotland [as per Engender’s latest Sex and Power publication].”

Of the 828 statues recorded in the whole of the UK, only 174 of them are female - around one in five. But that doesn't tell the whole story. Looking just at named women rather than nameless female figures whittles the figure down even lower, to 80. In contrast, out of 534 statues of men, 422 of them are named [source: The Public Monuments and Sculpture Association].

Coinciding with Women's History Month, the annual month-long celebration which highlights the contributions of women to events in history and contemporary society, The NACWG is  calling on members of the public to nominate modern day women who deserve to be recognised with a statue of their own, using the hashtag #GenerationEqual on social media.

Louise added: “We want to encourage conversation around societal change, challenge this underrepresentation and make women’s contributions to society more visible – especially those facing multiple discrimination - in politics, in sport, on boards, and even in the street.

“With so many inspiring accomplishments all too often overlooked, it’s time we paid homage to these amazing women making a difference in today’s society. We hope this activity inspires people of all age, race, gender, religion and belief to join the conversation.”

Earlier this year, The NACWG published its second annual report which included seven recommendations to the First Minister following its review of policy coherence and gender equality throughout 2019. At the NACWG Circle event on 29 January, Ms Sturgeon advised that a full and considered response would follow, but outright accepted the recommendation to upscale the Equality Unit to a Equality, Human Rights and Inclusion Directorate and the Senior Officials and Leaders Group. Recommendations in the latest report build on those made by The NACWG in its 2018 Report and Recommendations - of which, all eleven were subsequently accepted by Nicola Sturgeon – with the recommendations devised to work in tandem to drive forward the gender equality movement.

The NACWG 2019 report and recommendations can be found at: https://onescotland.org/wp-content/uploads/2020/01/NACWG-2019-Report-and-Recommendations.pdf