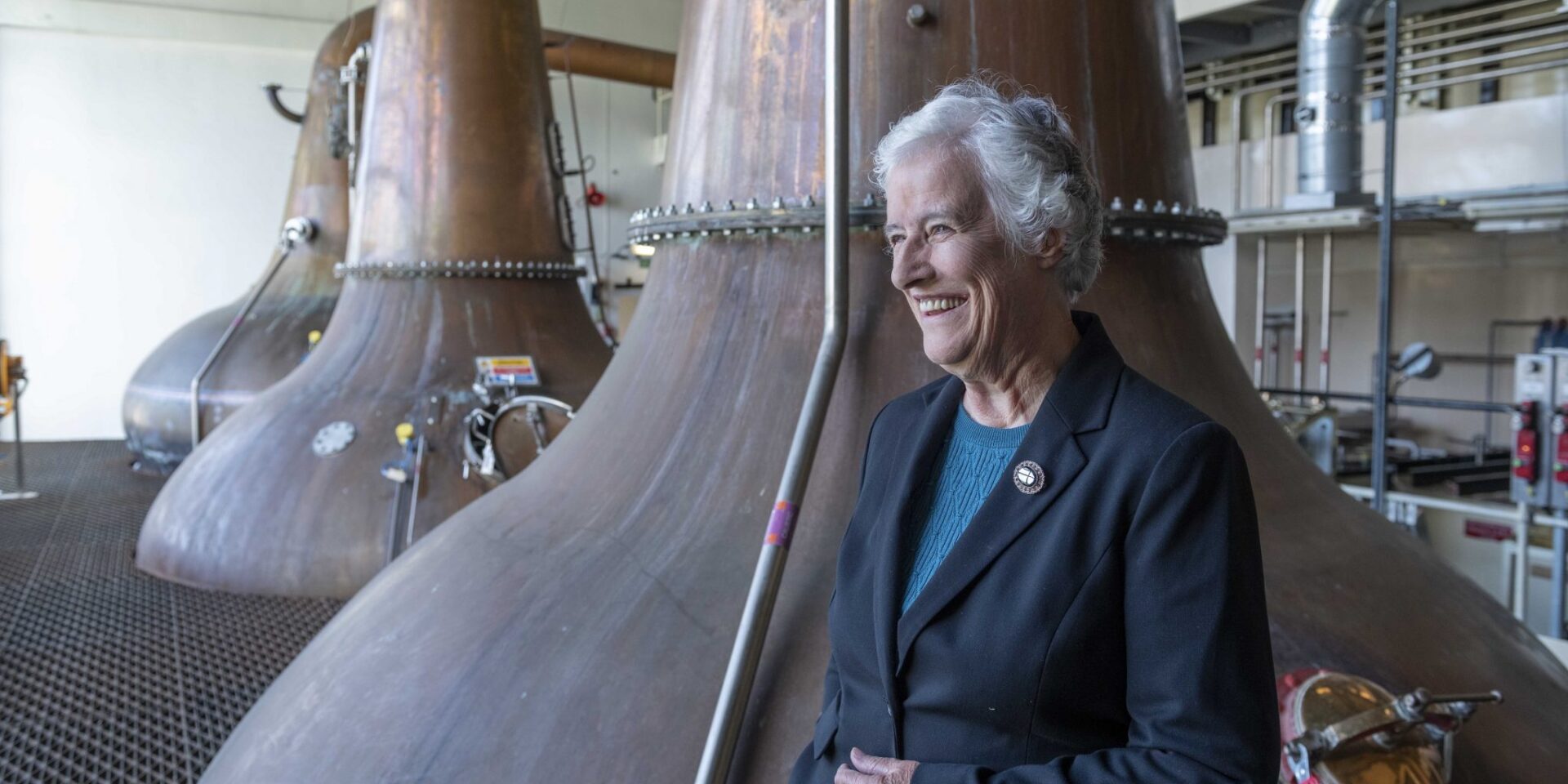 Nora Fraser, who celebrated her milestone birthday yesterday (on 4 September), was born at Linkwood Distillery in one of the site cottages in 1939. The daughter of Henry Arthur Stephen and his wife Elizabeth, Nora grew up with her two brothers, Jim and Henry, living in the shadow of an operational whisky distillery.

Now, Diageo, which owns Linkwood Distillery, has opened its doors to Nora and her family, allowing her to return to the site of her childhood home for the first time in 55 years. Nora was joined by her son Steve and her daughter Susan, along with their partners, for the visit which was an emotional trip back down memory lane. Nora and her family were met by distillery manager Debbie Watt who gave them a guided tour of the Speyside site.

Nora’s childhood was not uncommon during this period but she and her siblings were the only children to live at Linkwood Distillery during the 30s and 40s. Her father, Henry, began working at the distillery after serving in the latter stages of WWI. After working his way up the ranks, holding a variety of roles including Mashman and Brewer, he eventually earned the title of Head Brewer at the distillery. Whilst he was employed at Linkwood, he lived in a tied cottage with his family. Nora herself lived at the distillery until 1958, when she moved to Aberdeen to study at university before graduating as a pharmacist. It was at university she met her late husband Robin who she married in 1962, leaving from Linkwood to the church in Elgin.

Speaking of her visit, Nora said: “A lot has changed at Linkwood  since I grew up there. It’s sad that our family cottage no longer exists but the distillery has, of course, been rebuilt and brought up to date.

“What does remain though are the fond memories of growing up in such a unique environment. I’m sure very few people can say they were actually born at a working whisky distillery and this is something I’m very proud of. As a family we loved living here with all the sights, smells and noise. It’s funny how things flood back just by walking around. It really does mean so much to be able to come back to my childhood home, a place which hold such a special place in my family’s hearts.”

Nora’s son Steve Fraser said: “I vividly recall as a child my Granda talking about his life in the distillery and his affinity with whisky. His passion has influenced me greatly and I am very much a whisky enthusiast to this day. I have visited many distilleries but it was so special to be able to visit one with such a close family connection, especially on my Mum’s birthday.”

Linkwood Distillery Manager, Debbie Watt, said: “It was an absolute pleasure to welcome Nora and her family back to the distillery. I have never met anyone who can say they were actually born at an operational whisky distillery but it was fascinating to hear her story and learn more about her family’s connections to Linkwood.

“Despite the changes in the whisky industry since Nora grew up here, people are still at its core and we are honoured to help celebrate Nora’s 80th birthday.”

During her tour of the distillery, Nora recalled vivid memories of life growing up next to a working distillery, including being told to stay indoors whilst casks were being rolled, and wandering through the distillery as a young child whilst the stills were being worked. She looked through family photos taken at her Linkwood home, including from the day she was a  bridesmaid at a friend’s wedding.