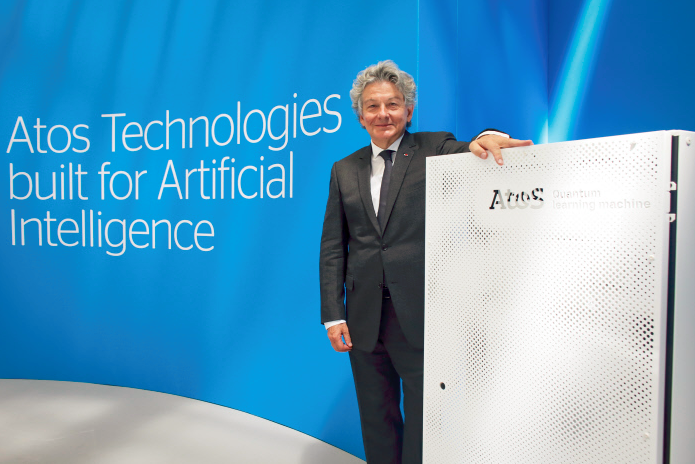 Atos, a global leader in digital transformation, announced the latest version of its Atos Quantum Learning Machine (Atos QLM), more powerful and scalable, with a doubled power capacity and the ability to simulate physical Qubits. The Atos Quantum Learning Machine is the first commercially available and ready-to-use quantum system, capable of simulating up to 41 quantum bits (Qubits).

Just one year after its launch, the Atos Quantum Learning Machine has had a strong commercial success with universities, research laboratories and companies: at the US Department of Energy’s Oak Ridge National Laboratory, in France (at the CEA and the University of Reims) in the Netherlands, in Germany and most recently at the University of Applied Sciences in Upper Austria.

Today, at the third edition of Atos Technology Days, Thierry Breton, CEO and Chairman of the Atos Group, presented the new version of the Atos Quantum Learning Machine, incorporating several new features from the Atos R&D Laboratory and supported by a world-renowned Scientific Council:

Designed by Atos through its quantum laboratory, the first major quantum industry program in Europe launched in November 2016, the Atos Quantum Learning Machine enables researchers worldwide to run quantum simulations on premises, and to develop and validate their quantum algorithms for future quantum accelerators with real QPU (Quantum Processor Units).

Thierry Breton, CEO and Chairman of Atos, said: "Atos, through the launch of its Atos Quantum program in November 2016, is the quantum computing pioneer in Europe, supported by a world-renowned scientific council composed of Nobel Prize and Fields Medal laureates and the best international experts in this field” said “We are already anticipating the ‘digital tsunami’ that may be represented by quantum computing, compared to the wave of digital transformation that we are currently experiencing. To help researchers and companies prepare for it, I am delighted to unveil – on the occasion of Atos Technology Days 2018 – the new version of the Atos QLM, now with a power of 41 Qubits. It also incorporates world-firsts in terms of simulating ‘quantum noise’ in order to make the simulation even more realistic. These advances – combined with our work to develop a quantum accelerator within five years – place Atos and its customers in an ideal position to take advantage of future digital revolutions.”

Atos has already delivered a first copy of its new quantum simulator to the Austrian University FH Oberösterreich (Hagenberg), which will help professors and researchers at the Department of Secure Information Systems with the analysis and development of new algorithms needed to improve cryptographic processes.